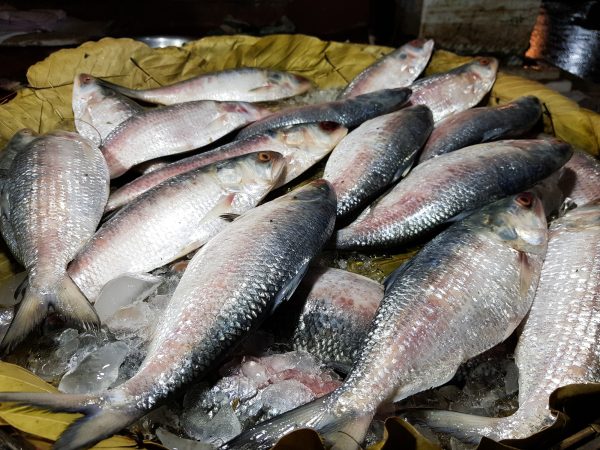 Hilsa fish from the Padma River in Bangladesh is heralded as a great delicacy of supreme quality, especially in the Indian state of West Bengal. Around September and October every year, the state’s Durga Puja festivities mark the peak demand for this prized catch.

Though there are other hilsa-exporting countries in India’s neighborhood, like Myanmar, Indonesia, Iran, Malaysia, Pakistan, and Thailand, and the fish variety is also produced on a domestic scale in the states of Gujarat and Maharashtra, Bangladeshi hilsa is the most in-demand.

Thus, a discussion on hilsa exports takes place every time Bangladesh Prime Minister Sheikh Hasina visits India, and her recent September visit stood as no exception. In fact, the issue was addressed on the very first day of Hasina’s four-day visit to Delhi, which in turn, resulted in the first hilsa consignment making its way to Kolkata’s markets on September 6, the third day of her official visit.

The hilsa fish has emerged as a symbol of diplomacy in India-Bangladesh ties, with Hasina using the silver fish variety on several occasions as exports and gifts to advance diplomatic goals. This practice has been carried out since she first assumed office in 1996, when she gifted hilsa to the then-West Bengal Chief Minister Jyoti Basu. This took place just before the Ganges Water Sharing treaty, a landmark agreement on sharing the waters from the Farakka barrage, was signed between India and Bangladesh.

Following West Bengal Chief Minister Mamata Banerjee’s electoral victory in 2016, she too was gifted a consignment of the prized fish as a congratulatory message. This led many to believe that the Bangladeshi government was trying to foster friendly ties between Kolkata and Dhaka to resolve the long-pending Teesta water sharing stalemate.

As per reports, 2,450 metric tonnes of hilsa fish are to be exported to India this year by September 30. However, increasing hilsa prices in Bangladeshi markets due to insufficiency in the availability of fish stocks from the Padma River are raising umbrage among the local population about the mass exports.

Indeed, Dhaka instituted an export ban in 2012 due to a shortage of production in Bangladesh, and a lack of progress on the Teesta water-sharing issue, due to disagreement between India’s ruling government at the center and the Banerjee-led state government in West Bengal. To this end, a legal notice was recently sent to Bangladeshi governing authorities, including the Ministry of Foreign Affairs and the Ministry of Commerce, on ceasing any further hilsa exports to India.

In the past, however, the Bangladeshi government has given special permission to carry out hilsa exports to India as a goodwill gesture. In 2021, a special cargo of 4,640 metric tonnes of the much sought-after variety made its way to India.

Usually sold at a rate of 800-1,400 rupees on average, hilsa exports generate massive revenues for Bangladesh. It is for this reason that every year before the commencement of Durga Puja festivities, large numbers of Bangladeshi exporters apply for permission to the Ministry of Commerce to export the popular delicacy to India.

Likewise, West Bengal has been experiencing a dwindling hilsa catch due to growing demands and over consumption. As a result, fish importers in West Bengal have often requested authorities in Dhaka to lift the export ban, as decent-sized hilsa fish are becoming hard to find in the West Bengal markets.

Though fish stocks reach West Bengal through the Benapole-Petrapole border, which is India and Bangladesh’s primary border crossing, both in terms of cargo and passenger movements, a further challenge arises for the Hasina government with regard to the illegal smuggling of the popular fish variety. This has arisen due to a huge demand-supply gap in hilsa fish stocks through porous border areas like Angrail, Hakimpur, and Hilli.

The Hasina government has to tread carefully while balancing between the domestic demands of its electorate and securing diplomatic gains with India, in light of the upcoming general elections next year. In this regard, the practice of hilsa diplomacy by the Hasina-led Awami League government has emerged as a major determinant of its political fortunes.