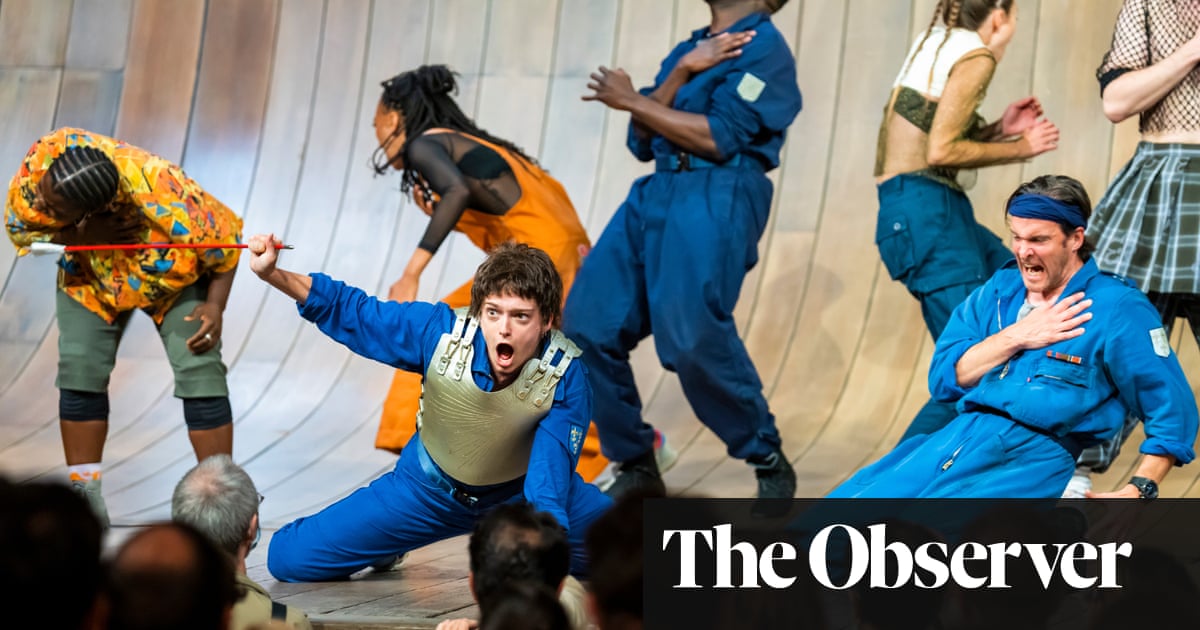 The week in theatre: I, Joan; The Glass Menagerie; Silence – review

“Non-binary finery”: I would count it worth going to I, Joan for that phrase alone. To see and hear it translated into movement, shape, colour, sound and gesture is to be part of a remaking of the stage, an explosion of new life.

Charlie Josephine’s play was attacked before it had been seen for depicting Joan of Arc as non-binary. I have no difficulty about the peasant saint declaring she cannot think of herself as a girl, when the play is obviously speculative rather than meticulously historical. Particularly since Isobel Thom – forthright and natural, they graduated from drama school two days before going into rehearsal – makes their pronouncements with such a sense of exploration. Joan’s calls to arms are candid and fiery, but not prescriptive.

There is no better place to see someone making themselves up than in the theatre. You can be with a character step by step, and the self-discovery is wraparound, extending beyond an individual actor. All elements are vibrantly rethought in Ilinca Radulian’s production.

Here, the transformation scene is as complete as Cinderella’s, but instead of rags to ballgown it has Joan shucking their cumbersome peasant skirt and strapping on warrior wear. “I must alter what they see so they can hear me.” Later, they kick aside a puddle of pink garments that the queen and queen mother – formidable in slinky gowns – press upon them. A band – tuba, trombone and percussion – perform Laura Moody’s music, under the direction of Joley Cragg: growling, resonant, nothing flutey or tinkling; everything requiring puff and swagger and frankness – and oh the dying roar that is emitted in martial defeat. Dance sweeps the stage as Joan develops a new vocabulary of spiky, pulsing gesture and movement to galvanise an army. The design, too, invites fluidity. Naomi Kuyck-Cohen (hoorah! I remember her talent as a student a decade ago) has created a marvellous wooden wave – a skateboarder’s ramp – down which characters slide into major action and climb to take the higher view.

Jolyon Coy is a very funny dauphin, stamping toddler-like in underpants and crown; Adam Gillen finely inflected as a misfit in macho land. Though the script is baggy, it does nip: Joan turns on the clerics in gowns who will send them to the stake, as they click around like clockwork toys – and remarks that while fussing about Joan’s clothes, they are blind to their own. Not for the first time in the evening, the audience’s own eyes are prised open.

In an unusually illuminating programme note to The Glass Menagerie, Rosanna Vize describes how pandemic postponement led her completely to change her design. A sign for the Paradise dance hall, originally tiny, now dominates an almost bare (scattered mics and chairs, and later jonquils) stage. Its huge neon letters hang over the action, slowly revolving, as if to taunt the unhappy household beneath. The effect, hauntingly lit by Lee Curran, is tremendous, ironic, melancholic.

Tennessee Williams’s play, though set in the 30s, was first produced in 1944. There are traces of both periods in talk of distant bombardment, of straitened circumstances. Atri Banerjee’s production does not hammer home these circumstances or their contemporary parallels, but tellingly threads the evening through with Giles Thomas’s epoch-hopping music. It also includes a wild, fantastic dance to Whitney Houston’s One Moment in Time: what could be more apt when the real exploration here is of how memory ensnares and deceives?

The characters begin facing away from one another, their energy sapped. Rhiannon Clements’s disabled sister is unusually forthright but caged in herself. As the ravening mother, Geraldine Somerville tightens her voice to slide between flutter and bitterness; her mincing memories of southern servants have an added edge as Eloka Ivo, who plays the “gentleman caller”, is black. Ivo shrewdly suggests real vitality and manufactured assurance. He wants to be an influencer. And is: when he boasts of the hugeness of his shadow he betrays vanity, but tells the truth about his effect. Dripping discontent, Joshua James, who narrates the action and takes part in it, acutely focuses the sense of characters at one remove from themselves: every now and then he reaches out a hand as if to stroke the words suspended in the air.

Eloka Ivo as the ‘gentleman caller’ in The Glass Menagerie. Photograph: Marc Brenner

What a missed opportunity. Silence takes on a hugely important, seldom discussed subject: the slashing apart of India – partition seems too dainty a term – by the British in 1947. Abdul Shayek’s co-production with Tara Theatre is based on first-hand accounts gathered by Kavita Puri, who sought out people now living in the UK who were caught up in the events. She made from these an important radio series and a book.

The material is shattering. The division of land was arbitrary. The violence that followed was catastrophic: torture; slaughter; women raped and shamed – a young girl, dishonoured, moves her plait so that her father can behead her. Hindus and Muslims found themselves “friends in the afternoon, wanting us dead in the afternoon”.

Renu Brindle and Sujaya Dasgupta in Silence at the Donmar. Photograph: Manuel Harlan

A formidable silence kept these stories unheard. The reluctance to speak is explained in one case here by shame (a man regrets his Hindu nationalism) but most often by trauma. And British institutions that caused the harm may not have opened themselves/ourselves up to hearing about it. The mission is vital.

Yet in this four-handed adaptation – by Sonali Bhattacharyya, Gurpreet Kaur Bhatti, Ishy Din and Alexandra Wood – documentary and drama are both diminished. The accounts are introduced by an unnecessary story about the documentary maker. Performances are often overemphatic; Rose Revitt’s screen-based design is fidgety. Verbatim history has been extraordinarily important in the theatre – and on radio (where surely it deserves its own strand). Yet you sense its power only intermittently here.

Star ratings (out of five)