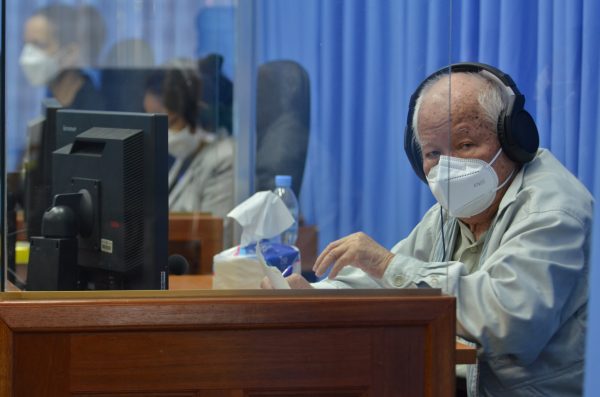 After $350 million, long delays, and just three convictions, many people have asked whether the tribunal was worth the expense and effort.

Former Khmer Rouge head of state Khieu Samphan listens on during his appeal at the Khmer Rouge tribunal in Phnom Penh, Cambodia, August 18, 2021.

On Thursday, September 22, the curtains at the Khmer Rouge Tribunal in Cambodia will open for the last time. Given the $350 million spent, long delays, two trials, and non-stop controversies, many people wonder: was the tribunal worth the expense and effort?

I am one of them. I served as an expert witness at the tribunal in 2016. And I have spent years conducting research on the Khmer Rouge, a group of Marxist revolutionaries who seized power in April 1975 amid the Vietnam War. By the time they were toppled from power in January 1979, Pol Pot’s Khmer Rouge had committed genocide.

Due to geopolitics, it took almost 25 years to establish the United Nations-backed Khmer Rouge Tribunal, formally known as the Extraordinary Chambers in the Courts of Cambodia (ECCC). But, since it commenced operations in 2006, the court has convicted only three people. Two others have died in custody. The last one standing is 91-year-old Khieu Samphan, the former Khmer Rouge head of state, whose appeal will be decided on Thursday. Then the ECCC will start shutting down.

The tribunal has many supporters and detractors. Most fall into three camps.

Purists: For legal purists, the law has a narrow function: “to render justice, and nothing else,” as philosopher Hannah Arendt put it. Arendt made this claim while expressing reservations about Israel’s politicization of the 1961 trial of Adolf Eichmann, the Nazi bureaucrat who oversaw the deportation of Jews. Doing otherwise, Arendt warned, would lead to a show trial.

This is exactly what some human rights actors and even ECCC defense lawyers claim has happened at the ECCC. Their concerns are legitimate and date back to the complex U.N.-Cambodian negotiations over the establishment of the tribunal.

In 1999, a U.N.-appointed Group of Experts recommended the establishment of an ad hoc international tribunal like the ones held after mass violence in Rwanda and the former Yugoslavia. However, the Cambodian government wanted control and only a few trials. The ECCC was a 2003 compromise.

As a result, most legal purists regard the tribunal as a failure.

Progressivists: Progressivists acknowledge such legal shortcomings, but believe courts have a broader purpose. Justice, in their view, can be curative and transform society. From this “transitional justice” perspective, international tribunals can help achieve the liberal progressive goal of transforming post-authoritarian societies into democracies governed by the rule of law and human rights.

The ECCC has been deeply intertwined with the idea of transitional justice. The 2003 U.N.-Cambodia agreement foregrounded Cambodia’s “pursuit of justice and national reconciliation, stability, peace and security.” These goals are embodied by the court’s slogan, “Moving Forward through Justice.” The International Center for Transitional Justice and other actors have sought to help facilitate Cambodia’s transformation.

The hoped-for democratic transformation has not materialized. Instead, Cambodia’s ruling party has cracked down on the opposition, suppressed human rights, and drawn close to China. Some claim Cambodia has become an authoritarian state.

Given this outcome, most progressivists also regard the ECCC as a failure.

Instead, pragmatists look for modest achievements that can help a post-conflict society attain a measure of justice and healing for atrocity crimes. Along these lines, the ECCC’s accomplishments include holding some Khmer Rouge leaders accountable, combatting genocide denial, and deterring would-be genocidaires. And, though limited in purview, the tribunal has clarified the historical record and compiled key documentation about Khmer Rouge rule.

Working with non-governmental organizations, the court has also robustly engaged victims and the broader public. A 2018 study found that, despite outreach challenges in a rural country, most Cambodian victims view the ECCC favorably and are content with the small number of trials.

These achievements are significant. For this reason, most pragmatists view the tribunal as a success.

I do as well. As I recount in my forthcoming book, “Anthropological Witness: Expert Lessons from the Khmer Rouge Tribunal,” it was because of such pragmatic possibilities that I testified as an expert witness at the ECCC. I wanted to contribute to the process of justice-seeking in Cambodia by helping explain how and why genocide took place.

Looking back, the ECCC offers a lesson and reminder.

Justice is a salve. While it is messy, it can soothe and help heal. But if you expect it to cure, justice will break your heart.