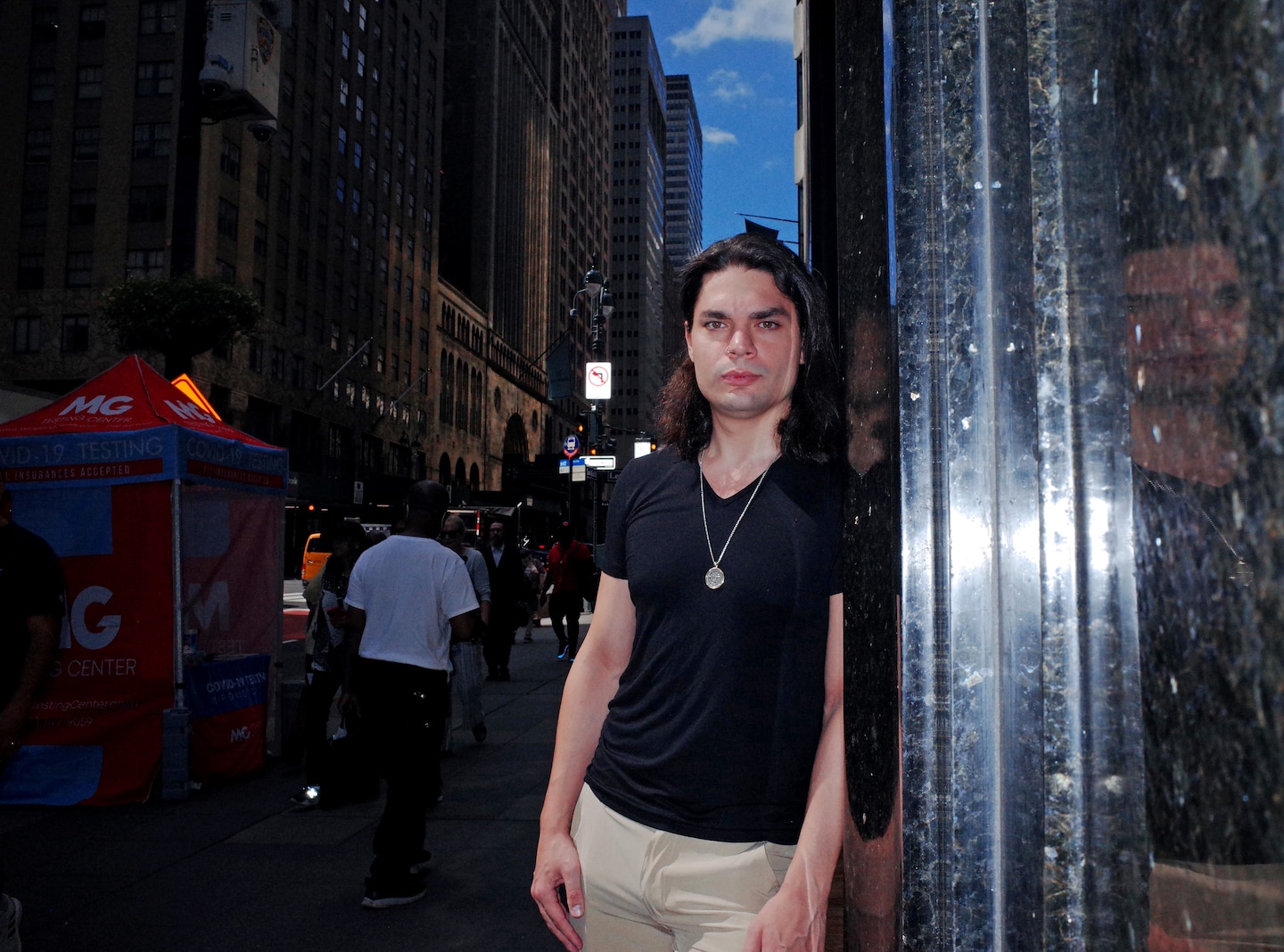 A Jewish activist was attacked amid rising hate. The DOJ took action.

When Matt Greenman heard about a pro-Palestinian rally in Manhattan in April, he grabbed an Israeli flag, met the demonstrators on 42nd Street and marched ahead of them, wearing the flag like a cape. His counterprotest didn’t last long. Moving toward the sidewalk, investigators say, he was attacked by Saadah Masoud — a founding member of Within Our Lifetime, a Palestinian activist group — who punched him and dragged him across the pavement, causing a concussion.

In June, the Justice Department charged Masoud with a federal hate crime, saying he targeted Greenman, who is Jewish, because of “his perceived national origin, and actual and perceived religion.”

The case is part of a surge of federal hate-crime prosecutions this year under Attorney General Merrick Garland; in the first six months of 2022, the Justice Department filed 20 cases, a pace that would eclipse any single year of the Obama or Trump administrations.

Officials tout the prosecutions as one way the Biden administration is trying to address a spike in hate crimes, an effort the White House highlighted at a summit Thursday on countering bias-fueled violence. Garland announced at the event that his agency will require all 94 U.S. attorney offices to work more closely with local jurisdictions to improve the tracking and reporting of hate crimes.

But Masoud’s prosecution also raises questions about how these cases are chosen and what federal interests are served by pursuing them. A lawyer for Masoud said her client, who has pleaded not guilty, is a fervent “anti-Zionist” who opposes Israel’s treatment of the Palestinian people and is being unfairly prosecuted over his political ideology.

Former Justice officials said the department’s policy has generally been to defer to local prosecutors and step in only if localities either do not bring charges or fail to win convictions. Federal authorities also look to intervene in jurisdictions that lack strong hate-crime statutes or sufficient resources to fully investigate crimes.

Jonathan M. Smith, a high-ranking Justice official in the Obama administration, said it makes sense that the department is taking on more cases. But with limited resources, he said, prosecutors should focus on those with a clear federal interest, such as attacks by organized hate groups whose networks cross state lines.

“A lot of what might be happening on a more common basis is probably best prosecuted locally,” Smith said, “and you should not try to create a federalization of prosecutions that essentially gets into what one thinks of as street crime.”

Assistant Attorney General Kristen Clarke, who oversees the civil rights division, said prosecutions are just one tactic in a broad federal strategy to combat hate and send a message of deterrence. She pointed to efforts to improve FBI data collection, a boost in federal funding for local jurisdictions and civil remedies, such as a settlement agreement with a Utah school district where minority students faced racial harassment and discrimination.

With hate crimes up, “naturally you’d expect to see us prosecute more cases,” Clarke said. “This is a priority for the department — standing up to hate, making sure victims know the federal government will respond and communities understand that we are with them, and making sure to send a strong message to perpetrators that they will be held accountable.”

The case against Masoud has geopolitical overtones. Antisemitic attacks in New York and other major cities have spiked in recent years, due in part, experts say, to rising extremism within the United States and growing tensions over Israel’s decades-long occupation.

But legal experts said nothing stands out as an obvious reason that the case rose to federal attention. The Justice Department declined to discuss the specifics of why it took the case. A year earlier, three pro-Palestinian demonstrators assaulted a Jewish man in Times Square; that case is being pursued on the local level by the Manhattan district attorney.

Gerard Filitti, who is representing Greenman on behalf of the Lawfare Project, said his client reported the assault, spoke to a New York City police detective and identified Masoud from a photo lineup. Soon, Greenman was summoned to meet with federal investigators from the U.S. attorney’s office for the Southern District of New York. Federal prosecutors charged Masoud with attacking Greenman and alleged that he had assaulted two other Jewish people in 2021.

“The detectives saw this as a serious issue and that Masoud was definitely a repeat offender,” Filitti said, “so they took it to the U.S. attorney’s office.”

From 2009 to 2020, the federal government averaged about two dozen cases annually. That’s a tiny fraction of the 8,263 hate crimes reported across the United States in 2020, the most in two decades, according to the FBI. Experts said evidentiary standards can be particularly difficult in hate-crime cases because prosecutors must prove a defendant was motivated by bias.

Prosecutors concluded 85 percent of their hate-crime investigations without filing charges, according to a Washington Post review of federal data. Authorities cited a lack of evidence in about half of those instances; other reasons included decisions to put federal resources toward other priorities.

Direct federal intervention has been “scattershot,” said Seamus Hughes, the deputy director of the Program on Extremism at George Washington University. “Prosecutors by their nature are conservative. They’re not going to lean too far in on a case, unless there’s a mandate from Main Justice to crack down.”

A review of recently filed federal cases shows that several involve the damaging of religious institutions, such as synagogues and churches, which are protected under a specific federal statute. Others relate to high-profile crimes — such as the mass shooting at a predominantly Black grocery store in Buffalo in May — that drew national attention.

The Justice Department also has begun to prioritize cases exacerbated by the pandemic, after Congress passed new hate-crime statutes last year. In August, federal prosecutors won a conviction against a Texas man charged with assaulting an Asian family that he accused of spreading the coronavirus.

Experts said the Justice Department appears to be shedding its historic reluctance to press hate-crime complaints in cases where local authorities already have filed charges. In February, the department won convictions in the cases of three White Georgia men, who already were sentenced to life in state prison for killing Ahmaud Arbery, a Black man, in 2020.

“I think they’re trying to make a point that regardless of whether there’s a local prosecution or not, there’s a legitimate federal interest,” said Marc Stern, the chief legal officer at the American Jewish Committee. “To the world at large, federal government intervention lends a measure of seriousness.”

The Justice Department also steps in when smaller jurisdictions request help. Eric Jenkins, the police chief in tiny Paola, Kan., said his department went directly to the U.S. attorney’s office to prosecute Colton Donner, a White man who pleaded guilty in February to hate-crime charges for threatening a Black man with a knife in 2019. Donner was sentenced to 27 months in federal prison.

“We would have just felt that the federal route would produce better results and be more appropriate,” Jenkins said. “We wanted to treat the case with the severity it deserved.”

Benjamin Wagner, who served as U.S. attorney for the Eastern District of California in the Obama administration, said local and federal authorities try to work collaboratively. But in some instances, he said, if “a U.S. attorney decides they are done waiting and need to move quicker and show this is on the front-burner, they can jump the line and charge the case.”

Last November, during his swearing-in as the first Black person to be the U.S. attorney for the Southern District of New York, Damian Williams announced plans to create a civil rights unit, citing a spike in hate crimes against Jews and Asian Americans.

Antisemitic attacks in New York, which increased sharply in 2021, surged again in the first few months of 2022.

The pro-Palestinian rally where Greenman was injured occurred on April 20. It began outside the Israeli Consulate, with marchers carrying anti-Israel signs and chanting “globalize the intifada.”

Videos show Greenman wearing the Israeli flag and Masoud following him, and marchers stomping on and setting fire to what appears to be the same flag. A separate video of Greenman’s assault, captured by a bystander, shows a man striking him, while shoving away a person trying to intervene.

The New York City Police Department declined to say why its detectives ended up working with federal prosecutors, rather than the state-level prosecutors working for Manhattan District Attorney Alvin Bragg (D). Williams’s office also declined to comment. Filitti, Greenman’s lawyer, said the detective with whom Greenman worked suggested to him that Bragg’s office did not seem interested.

Bragg drew criticism shortly after taking office in January when he told his staff not to prosecute some lower-level offenses to be able to focus on violent crime. But an official in Bragg’s office said police never brought Greenman’s case to the office’s attention, and she noted that Bragg successfully lobbied for $1.7 million in city funds to launch a dedicated hate-crime unit, calling it a “top priority.” His office is prosecuting a record 103 hate-crime cases, including 15 alleged antisemitic incidents.

“This case was taken directly to the Southern District by the NYPD hate-crimes task force,” said the official, who spoke on the condition of anonymity to discuss the active case. “We didn’t have a say in that.”

Rhiya Trivedi — who is representing Masoud along with Ron Kuby, a prominent defense attorney and talk show commenter — compared the altercation between her client and Greenman to a “bar fight” and said the federal government lacks jurisdiction to prosecute because Masoud did not assault Greenman over his religion or presumed national origin.

Rather, she said, Masoud was reacting in the heat of the moment to Greenman’s Israeli flag, which some Palestinians view as a symbol of Israeli occupation of Palestinian lands.

“This is ideological,” Trivedi said. “If this was a Ukrainian who captured a Russian flag, you would not rush to say this is a hate crime. We’d say this is an act in an ongoing debate in an active and ongoing war. This is a very dangerous argument the government is making.”

Masoud’s trial is scheduled for February. If he is convicted, he faces up to 10 years in federal prison, a stiffer penalty than if he were prosecuted under New York statutes, experts said. Greenman said he hoped the Justice Department’s involvement will elevate attention about what happened to him.

“It shows people that this is unacceptable,” he said. “We live in a country where you are allowed to express yourself without getting beat up.”

Sarah Cohen contributed to this report.