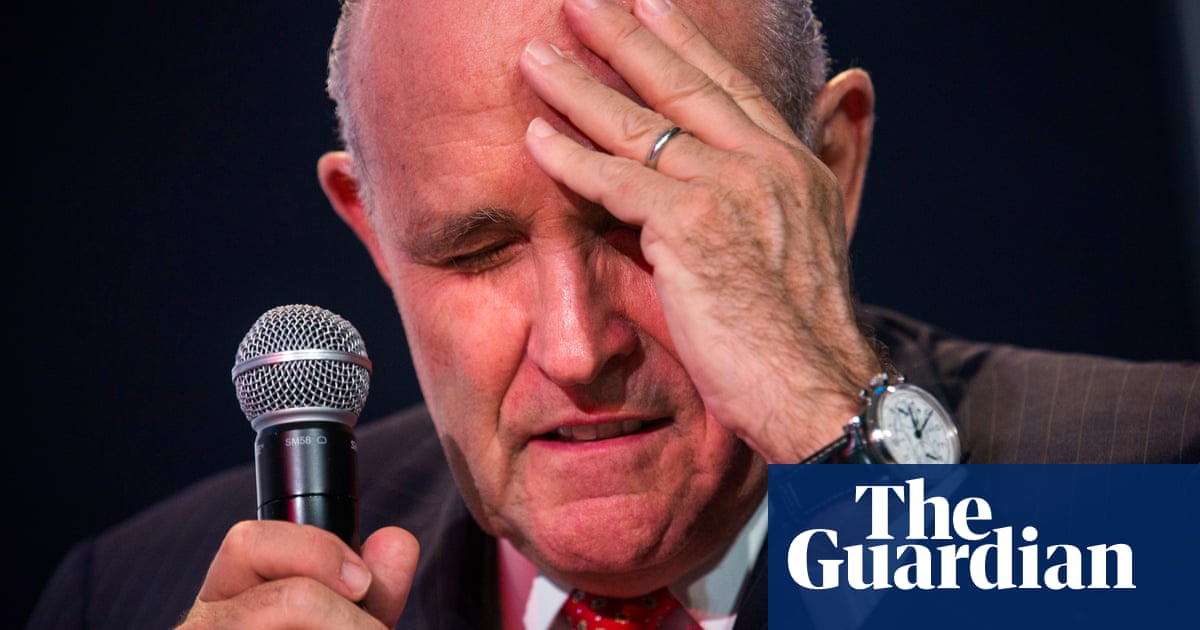 At a law firm dinner in New York in May 2016, an “unhinged” Rudy Giuliani, then Donald Trump’s suggested pick to head a commission on “radical Islamic terrorism”, behaved in a drunken and Islamophobic manner, horrifying clients and attorneys alike.

According to a new book by Geoffrey Berman, a former US attorney for the southern district of New York (SDNY), at one point Giuliani turned to a Jewish man “wearing a yarmulke [who] had ordered a kosher meal” and, under the impression the man was a Muslim, said: “I’m sorry to have tell you this, but the founder of your religion is a murderer.”

“It was unbelievable,” Berman writes. “Rudy was unhinged. A pall fell over the room.”

Later that year, after Trump beat Hillary Clinton for the White House, Giuliani was seriously considered to be secretary of state – top diplomat for the US.

He went on to closely advise Trump, as his personal attorney, during his chaotic presidency and its violent aftermath.

Giuliani’s drinking has been both widely reported and discussed under oath, in testimony before the House January 6 committee regarding his behaviour during Trump’s attempts to overturn the 2020 election.

It is also a feature of Giuliani: The Rise and Tragic Fall of America’s Mayor, a new biography by Andrew Kirtzman. Among other episodes, Kirtzman recounted a period of near-collapse, during which Giuliani stayed in seclusion at Mar-a-Lago, Trump’s Florida resort.

Berman’s memoir, Holding the Line: Inside the Nation’s Preeminent US Attorney’s Office and its Battle with the Trump Justice Department, will be published next week. The Guardian obtained a copy.

Berman’s main subject is his long battle with William Barr, Trump’s second attorney general, over what Berman says were attempts to use the Department of Justice for political ends. The contest between the two men culminated in a farcical attempt to fire Berman and, he writes, replace him with someone more politically pliable.

Giuliani, also a former US attorney for the SDNY, was mayor of New York City from 1994 to 2001, becoming known as “America’s Mayor” for his leadership during and after the 9/11 terrorist attacks. After a failed run for president in 2008 he was a close adviser to Trump when the billionaire launched his own campaign in 2015.

In May 2016, Trump told Fox News he had proposed a ban on Muslims entering the US because “radical Islamic terrorism” was “a real problem”.

He added: “In fact, I’m thinking about setting up a commission perhaps headed by Rudy Giuliani to take a very serious look at this problem.”

Giuliani had just joined Berman’s law firm. Berman writes that he organised a “cross-selling dinner”, to introduce the former mayor and other new lawyers to clients “at a large financial institution”.

Giuliani behaved well to start with, Berman says, but he “continued to drink” and “shifted the conversation to his work for Trump on immigration”. For Berman, the dinner became “an utter and complete train wreck”.

Giuliani, Berman writes, shared a “wholly inaccurate, alt-right history of the creation and development of Islam, stating that it was an inherently violent religion from its origins to today”.

To growing consternation among guests, Giuliani produced his phone and “showed the group drawings of violent acts purportedly committed by Muslims”.

There followed the exchange with the man in the yarmulke, who “for some reason, Rudy thought … was Muslim”, even though as a two-term mayor of New York, in Berman’s words, Giuliani “was clearly acquainted with Jews”.

After Giuliani’s diatribe, Berman “broke the silence with a stab at humour. ‘Well that’s seven years of client development down the drain,’ I announced.”

Giuliani “wasn’t slurring his words”, Berman writes, “… but his impulses had control of him”.

Berman says the story of the client dinner “never made it into the press, but it did get around”. A few weeks later, at a reunion for “hundreds” of former SDNY prosecutors, Berman was told there was “not a single former [prosecutor] in this room who has not heard about the dinner”.

Kirtzman reports that stories of Giuliani’s drinking ultimately contributed to Trump deciding not to make him secretary of state. The former mayor was also discussed as a possible attorney general.

Such heights now seem far away. Giuliani’s work for Trump in the attempt to overturn the 2020 election has contributed to the suspension of his law licenses and placed him in legal jeopardy, the target of a criminal investigation in Georgia.