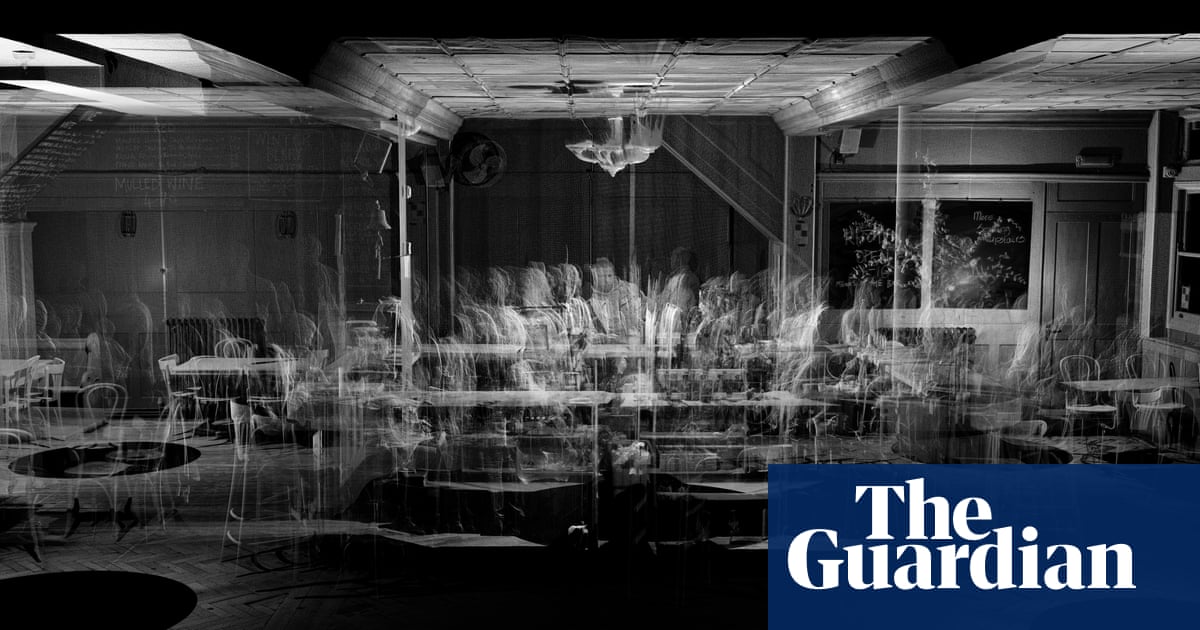 I’m at the Venice film festival, in a hyper-real city square, surrounded by lapping blue water and tourists who move in mysterious ways. There is a ginger cat here called Dorian who walks on his hind legs and speaks with a French accent. Dorian is showing us how to walk and turn and jump and crouch. He’s concerned by the tourist who can’t get herself off the ground. Dorian explains that if we ever get lost we should press the “respawn” button which will put us right back where we began. He sighs heavily and says: “Sooner or later everybody gets lost.”

It is the fear of getting lost – this terror of the unknown – that scares many punters away from Venice Immersive, which sits behind the big Mussolini-era casino that hosts the film festival proper. That and the boat ride, the headsets, the schedule, the stress. The movies on the main programme: they’re largely a known quantity. Whereas the “extended reality” exhibits out on VI island are almost too much to process; we lack even the grammar and the language to frame them. To misquote Bob Dylan, something is happening here – but no one, it seems, can definitively say what it is.

There’s a pleasing irony to the fact that Venice, the most venerable film festival on the circuit, has been the one to boldly go where others haven’t yet dared, embracing an emergent raw art form and celebrating its makers. The Venice Immersive selection (formerly known as Venice VR) offers 43 works that its curators feel point the way to “the future of storytelling”. These exhibits are housed on a small derelict island, Lazzaretto Vecchio, that has variously served as a quarantine centre, a leper colony and a dumping ground for unclaimed cats and dogs. There’s a pleasing irony to that as well. Depending on who you speak to, VI is an outcast, a stray, or the king across the water, waiting to claim its rightful throne.

“The new needs friends,” says Anton Ego, the lofty critic in the Pixar film Ratatouille – and so it is with Venice Immersive, which struggles to lure journalists away from the red carpet, the premieres, the latest twist in the Don’t Worry Darling celebrity spat. Festival reviews are a niche pursuit at the best of times, but they at least help smaller films to be sold overseas and eventually seen. But immersive media, so far, largely exists in a vacuum. There is no established distribution model and very little market to speak of. It’s a chicken-and-egg situation, explains Michel Reilhac, who curates Venice Immersive alongside the UK’s Liz Rosenthal. Or to put it another way: immersive media needs press coverage to build an audience that isn’t yet in a position to consume immersive media anyway. He says, “The fact is that many of the works here on the island won’t be visible again after this week is over.”

In the early days of the moving image – before George Méliès sent his rocket to the moon and DW Griffith made Birth of a Nation – cinema was thought of as a technological gimmick, an illicit cheap thrill; the preserve of travelling fairs, vaudeville and peep shows. Probably immersive art is at that stage itself. It’s a nascent entertainment, still finding its feet. I’m beguiled by it and confused by it – and I suspect I’m not alone. But each day I make the trip from the casino, there seem to be more and more people joining me on the boat.

Remade as a stark, minimalist exhibition space, VI island feels like CS Lewis’s Wood Between the Worlds. It’s a virtual lucky dip; a series of trips without a map. Inside the undressed brick warehouses, the ushers fit the guests with hefty Oculus headsets with the air of surgeons prepping patients for a minor medical procedure. The programme offers 20 stand-up projects, seven 360-degree videos and a reputed 30 digital planets in what’s called the Worlds Gallery. Tucked away in the corners, one also finds installations of the sort you might encounter in a more traditional exhibition space. My favourite of these is Matthew Shaw and William Trossell’s extraordinary FRAMERATE: Pulse of the Earth – a remorseless multichannel rush of changing seasons, human traffic and geological change. FRAMERATE shows us patterns, repetitions and a future that’s upon us before we have time to breathe and take stock.

So it’s not a lack of fabulous material that presents a challenge for visitors to VI island. If anything it’s the opposite. There are interactive games and passive 3D dramas; video installations and virtual tours; spellbinding art and frivolous distractions. Obviously the level of diversity posed headaches for the curators. Immersive might be that bit more reassuring if the whole thing could be simplified: if it were boiled down to one flagship product. This, though, would run counter to the spirit of the artform itself.

“Yeah, I don’t think we want to point at one set of work and say, ‘This is the thing’,” Reilhac says. “We embrace the opening and broadening variety. That’s why we changed the name this year from Venice Virtual Reality to Venice Immersive. Because we’re focusing on the content not the technology, the whole idea of immersive, spatial storytelling. So it’s a very fluid concept. It’s about bringing immersive media to the people and then navigating it together.”

The business is new. It’s barely a business at all. The headsets are expensive (around £600). There are only a few established platforms to connect with (Meta, Sony Playstation). But Reilhac foresees a time when the technology improves and becomes ubiquitous: when the headsets will become goggles and we’ll wear them on the street. “In the next couple of years that will happen,” he says. “And it will be just like the cellphone – different brands, all doing much the same thing.”

Cocooned in my headset, I explore worlds and play games. I find the virtual worlds a little stressful (much as I do the real world) and am altogether useless at the games. But the VR animations are a gorgeous sight to behold. Pedro Harres’s From the Main Square charts a rural community’s journey to modernity and apocalypse, while Wang Fish’s Red Tail is a strange, lush fairytale, like a 360-degree Miyazaki film. During the course of Victoria Bousis’s Stay Alive My Son, I get hopelessly lost inside a digitally recreated Angkor Wat – banging into walls, bouncing off metal gates – while an old man recounts his experiences of the Cambodian genocide. I’d like to call it quits and remove my headset but find myself crippled by a perverse sense of politeness. The temple isn’t real. The narrator isn’t real. But it’s still an old man who wants to tell me about the Cambodian genocide.

I also like Nyssa, which recounts the adventures of a flame-haired witch girl, off on a mission to retrieve her magic broom. This is a collaboration between writer-director Julie Cavaliere and producer Michaela Ternasky-Holland, the first of a series (Reimagined) which revisits lesser-known folk tales. Cavaliere started her career in film production, shifted into acting and then hung a left turn into immersive media. She and Ternasky-Holland were drawn to immersive because the form is open and inclusive, dependent on new voices and fresh ideas. But she concedes that the qualities that she sees as a positive remain off-putting for some.

“It’s like we’re out in the wild west,” she says. “Here we are in the heart of Venice and we’re having to shout from the rooftops to get people to come and look. And I understand that there can be something intimidating about it. Some people don’t want to put on a headset. Purists think we’re trying to replace cinema. I’ve heard that a lot – and I have to gently say that it’s not like that at all. No one is trying to replace cinema in the same way that film doesn’t want to replace theatre. It’s just another way of telling a story.”

Ternasky-Holland agrees, up to a point. “The industry that’s being built around us on VI island is a digital reality industry,” she says. “So the first step from here is to think about connecting digital reality with the more traditional entertainment industry.” She can’t envisage a scenario where that won’t eventually happen. Stories migrate and IP is portable. Film-makers will slowly incorporate aspects of immersive. “They’re going to realise that they can’t just make a film any more. They can’t just make a piece that exists in one medium, on the film screen. They’ll see that it can live elsewhere as well, as an XR [extended reality] piece or a VR piece. And in some way, shape or form, that’s going to bridge the casino with the island where we are now.”

No doubt she is right. But the island is tribal and there are second opinions in play. In the cobbled yard between the brick warehouses I get talking to Mike Salmon, the producer of the festival’s VRChat strand – a social VR platform that allows users from all over the globe to meet in digital worlds and explore photo-grammatic versions of Venice or Dubrovnik, or entirely concocted distant planets. “All the other exhibits are looking to cinema.” Salmon says. “But the Worlds Gallery is the punk rock version of the festival. It’s basically kids with access to building tools who can make whatever they like.”

The way Salmon tells it, VRChat solves one of the main sticking points around immersive: it provides a de facto distribution network, an open platform that he likens to YouTube. If you create your work within VRChat you can reach hundreds of thousands of users at a stroke – and potentially step into hundreds of thousands of worlds created by others. That’s the multiverse right there, he says. It’s free and untrammelled. Of course there’s a downside: it doesn’t generate any income.

This, then, is the situation for immersive art today. It’s the wild west before boom time, before the railroads were built. Or it’s a series of islands with no boats to connect them. Right now, Salmon says, what we think of as immersive media – VR, XR, the metaverse – remains largely siloed, with everything locked within its own particular system of apps. Eventually, ideally, it will become like the internet, global and unfettered, with all the joy and horror that entails. He says, “In the next few years the use of applications will go away and the use of websites will become much more common. Everybody will still have their own corner. But they’ll be able to move around freely, import what they need and be recognised when they open a new browser and walk in.”

It’s Salmon who steers me towards Rick Treweek’s Uncanny Alley out in the Worlds Gallery, with its pristine Venice piazzas and its feline travel guide. This, he says, explores the issues we’ve been discussing because the trip concludes with a bridgehead out to the world wide web. And so I send my avatar running after Dorian the cat as he leads us around town, upstairs and downstairs and into a series of glowing orange toilets that double as teleportation pods. One of these appears to have separated me from the group, because I am now in a post-industrial bar, being served by a robot, and I’m trying and failing to pick up a shot glass. Dorian says that the respawn button will return me to the start – to the bright city square – but pressing it feels like admitting defeat. I’ve come this far. People always get lost. And isn’t it the journey, not the destination that matters? Even the experts don’t know where immersive media is going. The challenge, I think, is to keep walking and see.