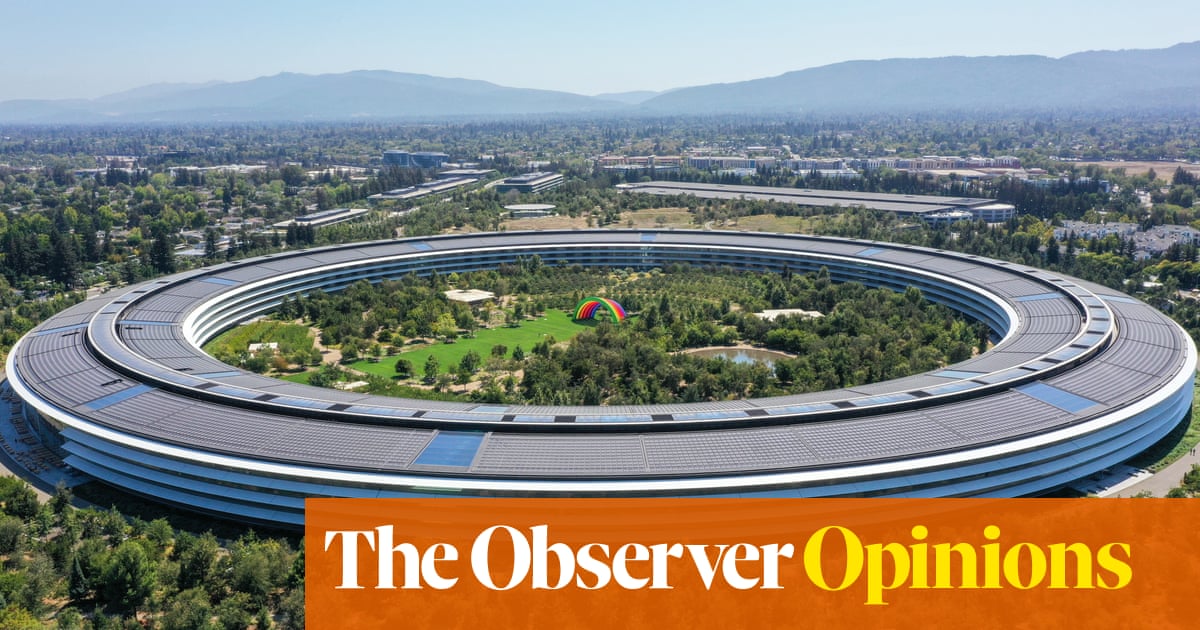 Will today’s tech giants reach a century? It’s all about the quality of the product

Show caption Apple Park in Cupertino, California. The gadget empire may endure, but can Meta and Google go the distance? Photograph: Anadolu Agency/Getty Images Opinion Will today’s tech giants reach a century? It’s all about the quality of the product John Naughton If you want to be an internet-age version of General Motors or IBM, you need to sell something people want and steer clear of political pitfalls Sat 17 Sep 2022 16.00 BST Share on Facebook

A question: what’s the average lifespan of an American company? Not any old company, mind, but one big enough to figure in Standard and Poor’s index of the 500 largest. The answer is surprising: the seven-year rolling average stands at 19.9 years. Way back in 1965 it was 32 years and the projections are that the downward trend will continue.

Remember that we’re talking averages here. The trend doesn’t mean that no companies currently extant will get to their first century. Some almost certainly will, as some have in the past: AT&T, for example, is 137 years old; General Electric is 130; Ford is 119; IBM is 111; and General Motors is 106. But most companies wither or are gobbled up long before they qualify for a telegram from the president.

With that thought in mind, let us examine the giant tech corporations that now straddle the globe and overawe our legislators. Apple is 46 years old; Amazon is 28; Microsoft is 47; Google is 24; Meta (née Facebook) just 18.

Which of these, if any, is most likely to make it into three figures? The answer depends on two things: which ones are providing goods or services that the world really needs and which are most vulnerable to shifts in public opinion and political attitudes towards their activities and business models.

Viewed through that lens, Microsoft and Amazon look like sure bets. In the western world at least, every big organisation – public or private – runs on Microsoft software and operating systems. (In the NHS alone, there are probably more than a million PCs and laptops running Windows.) For its part, Amazon has already established itself as part of the logistical infrastructure of western societies. And between them, Amazon and Microsoft cloud-computing services host an increasing number of critical services.

In the western world, every big organisation – public or private – runs on Microsoft software and operating systems

Apple has grown to be the world’s most valuable company by making beautiful kit, flogging it at high margins, building a closed hardware-software ecosystem and leveraging that to build an increasingly profitable services business. It’s not a racing certainty to reach 100, but worth a punt.

Which leaves us with Google and Facebook. Both have the same business model – to use close surveillance of their users to facilitate targeted advertising. Of the two, Google looks more secure, because at the core of its business is dominance of something that every internet user needs: a powerful search engine. In a sense, the company has built a prosthetic memory for the planet and although other search engines are available, none has come close to challenging it for dominance. The world would miss Google if it didn’t exist.

Is the same true of Meta/Facebook, though? Its business model is basically the same as Google’s – facilitating targeted advertising using the kind of close surveillance that the search engine giant initially pioneered. As well as Facebook, Meta owns Instagram and WhatsApp, with a contingent rats’ nest of challenges, caused by toxic user-generated content, which it seems unable to manage effectively. In what is being spun as a bold strategic gambit (but looks awfully like an attempt to exit from the resulting stink), the company’s boss has bet the corporate ranch on building a “metaverse”.

If he thought that with that one bound he would be free, however, he was mistaken. Instagram was originally a playground for the legions of young people fleeing Facebook and for a time worked nicely in that role. But then came TikTok, a Chinese-owned platform for people to upload short, funky videos, which has proved irresistible to those aforesaid youngsters and is driving Meta executives wild.

Their first response was to create a copycat product called Reels to enable Instagram users to create TikTok-type videos. Strangely, it hasn’t worked. Or, rather, it has worked – but perversely. It turns out that a significant proportion of Instagram Reels actually originated as TikTok videos! If imitation is, as the adage goes, the sincerest form of flattery, TikTok executives are doubtless delighted.

But, as an internal company report that was leaked to the Wall Street Journal reveals, Meta bosses are anything but. It turns out that Instagram users are spending 17.6m hours a day watching Reels, which is less than a tenth of the 197.8m hours TikTok users spend each day on that platform.

It’s strange to see a huge company flailing ineffectually like an elephant being tormented by a wasp, but that’s what’s happening at Meta. In addition, the metaverse project is burning money like it was going out of fashion, which possibly explains why the company is hiring 30% fewer engineers than it had originally intended this year. A survey by the Hustle newsletter found that the number of open job listings under augmented reality (AR) shows that Apple now has more vacancies than Meta in that critical field.

Looming over all this, though, is the realisation that if liberal democracies are to survive, they will eventually realise that surveillance capitalism is such a danger to democracy that it will have to be outlawed. If that happens, then the chances of Meta (and possibly also Google) being around in 2122 are, well, vanishingly small. Sic transit gloria and all that.

What I’ve been reading

What the Truth Social Flop Says About Trump is a lovely Politico column by Jack Shafer on Trump’s attempt to create his own Twitter.

The words have eyes

What Does GPT-3 “Know” About Me? is an interesting article by Melissa Heikkilä on what she discovered when she started asking an AI questions about herself.

The Chaos Machine is a useful review by Tamsin Shaw of Max Fisher’s new book on how social media has rewired our minds.