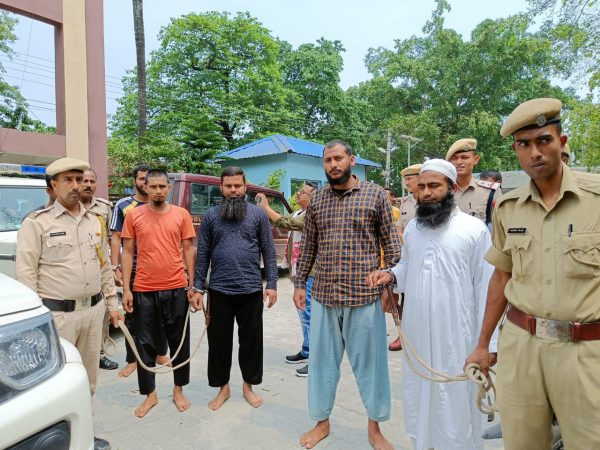 Never before were terrorists in India found to be as tech savvy as the al-Qaida-affiliated functionaries apprehended last month in India’s Northeast. The arrested functionaries were equipped with advanced software for communication designed to keep their activities totally under wraps.

Police and investigating agencies were stunned to discover an app for internal communication on the laptops of some apprehended Ansarullah Bangla Team (ABT) activists. The app was reportedly manufactured by software professionals in a foreign country. ABT, which is affiliated with al-Qaida in Indian Subcontinent (AQIS), is a banned organization in Bangladesh.

“These (ABT) were the most technologically advanced terrorist modules busted so far,” Assam Police chief Bhaskar Jyoti Mahanta told The Diplomat, adding that they “were using a very sophisticated app for encrypted communication.”

Mahanta said that a “huge amount” of information has been extracted from the arrested functionaries, including plans for their expansion in India.

On August 4, Assam Chief Minister Himanta Biswa Sarma told journalists that the app had “never been heard [of] before.” As many as five modules of the terror outfit have been busted in the state over the past four months, he said.

Another official involved in the probe described the app as being of “military grade,” which might have been produced in Germany, since there was previous evidence from other countries of some al-Qaida cells using similar software made in that country.

The arrest of an ABT activist in India’s northeastern state of Assam almost five months ago provided the lead to an extensive network of terror outfits across different regions of the country. So far around 30 functionaries of the group have been arrested from different states since the crackdown began in March. Among those arrested is a Bangladeshi national, who illegally crossed the border and settled in Assam for expanding the base of the outfit.

In addition to disseminating al-Qaida propaganda on social media, ABT sleeper cells have been identifying potential functionaries for the group. Electronic devices seized from the arrested individuals yielded data on jihadi literature and videos linked to al-Qaida.

Interrogation of the arrested functionaries revealed details about the group’s modus operandi and its mode of communication. The details about the software were mostly provided by an ABT cell in Bhopal that was busted a few months ago.

New recruits underwent intensive indoctrination after recruitment. After a few weeks, their laptops were loaded with the app for encrypted messaging and they were given lessons on how to operate the software. The cells that were established in India received instructions from their handlers in Bangladesh through the app.

Indian security agencies and the police have not ruled out the possibility of more arrests in other states of the country in the coming weeks. A section among them also expressed concern over the two videos released by al-Qaida in recent months, specifically targeting Assam. They are apprehensive these could inspire more people to join the group.

The first video released early this year carried a message from the outfit’s deceased head Ayman al-Zawahiri and the second gave a clarion call to Muslims to perform “hijrah (immigration) to Assam” to liberate the “ummah” (Muslim community) from the atrocities perceived to have been committed against Muslims by the Indian government.

Assam, along with Gujarat and Kashmir, has been on the radar of al-Qaida since 2014, when the group launched its South Asia chapter. The northeastern state caught the attention of the terror group following the controversy over the Supreme Court-mandated National Register of Citizens (NRC), which was an exercise aimed at identifying genuine citizens in the state.

Foreign nationals in Assam consist of Hindus and Muslims from Bangladesh and citizens from Nepal. There were allegations that the BJP government in the state had been harassing the Bengal-origin Muslims for being foreign nationals.

Eviction of encroachers from the Bengal-origin Muslim community from government land in the state also stirred controversy last year after a photographer was seen stomping over the dead body of a person whose house was demolished.

For al-Qaida and its affiliates, Assam appears to be an ideal ground to spot disenchanted people waiting for an opportunity to revolt against the government. So far, however, only a small section seems to have been attracted towards the jihadi groups as may be gleaned from the modules busted in Assam over the past two decades, including outfits like the Jamaat-ul-Mujahideen Bangladesh.