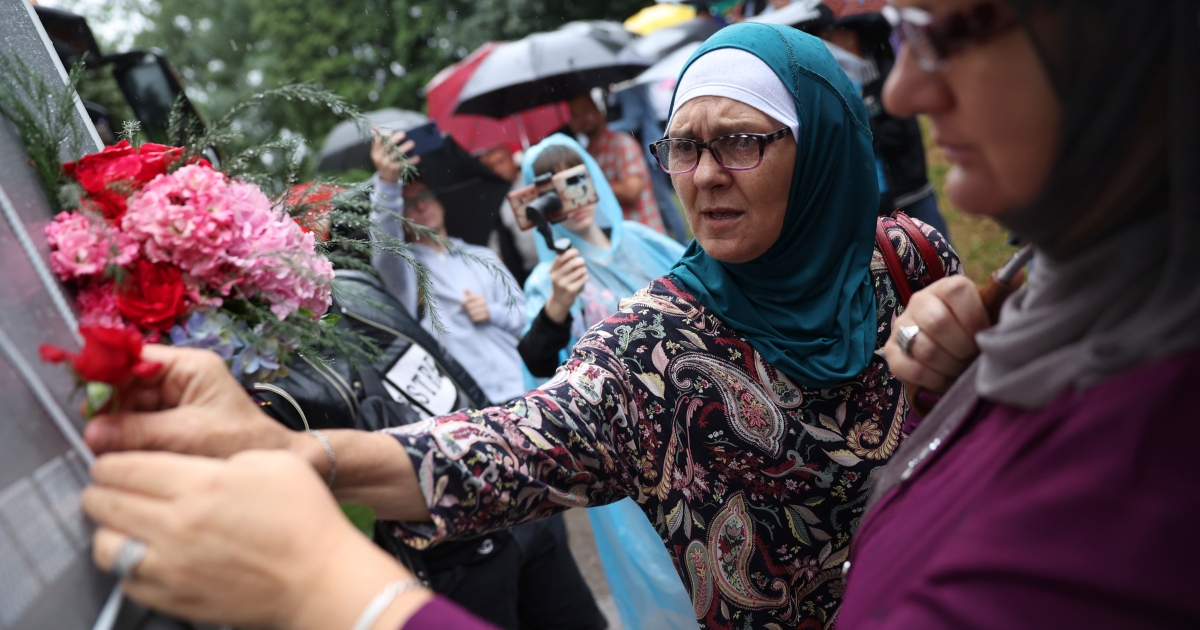 More than 8,000 men and boys from the Bosniak ethnic group perished in 10 days of slaughter by Bosnian Serb forces.

As thousands converge on the eastern Bosnian town to commemorate the 27th anniversary on Monday of Europe’s only acknowledged genocide since World War II, the crucial role women have played in forging a global understanding of the 1995 massacre also is getting recognised.

A permanent photo exhibition of portraits of the women of Srebrenica opened on Saturday in a memorial centre dedicated to the massacre’s more than 8,000 victims.

The centre in Potocari, just outside the town, is set to host an international conference of women discussing how they found the strength to fight for justice after being driven from their homes and witnessing their loved ones being taken away to be killed.

“After I survived the genocide in which my most beloved child and my husband were killed, it was the injustice of their killers, their refusal to acknowledge what they did and to repent, that pushed me to fight for truth and justice,” Munira Subasic said.

Subasic’s relatives were among more than 8,000 men and boys from the Bosniak ethnic group, which is made up primarily of Muslims, who perished in 10 days of slaughter after the town was overrun by Bosnian Serb forces in the closing months of Bosnia’s 1992-95 fratricidal war.

Bosnian Serb soldiers ploughed the victims’ bodies into hastily made mass graves, and then later dug up the sites with bulldozers and scattered the remains among other burial sites to hide the evidence of their crimes.

Bosniak women and children were packed onto buses and expelled from the town. But as soon as the war was over, Subasic and other women who had shared her fate pledged to find the remains of their loved ones, bring them back to their town and bury them there.

To do that, they created an organisation, Mothers of Srebrenica, which engaged in street protests and other actions to stay in the public eye.

They demanded that the mass graves be found, the remains identified, and those responsible for the massacre punished.

To date, almost 90 percent of those reported missing from the fall of Srebrenica have been accounted for.

“People often ask us who supported us, who had our back early on. But it was no one, we did it on our own,” Sehida Abdurahmanovic said.

“The pain is the best and the most difficult education, but also the most honest, because it comes directly from the heart,” she added.

Since the end of the war, Srebrenica has been located in the Serb-run Bosnian entity of Republika Srpska, while many of its pre-war inhabitants live in the country’s other entity, the Bosniak-Croat Federation.

In the immediate post-war years, crowds of angry Bosnian Serbs did their best to prevent women who had lived through the bloodshed from visiting the newly-found mass graves to search for items that once belonged to their loved ones.

To intimidate them, crowds would line up along the streets, shouting and throwing stones at buses carrying the women.

But the women kept returning.

For a long time, they had to be escorted by the NATO-led peacekeepers, but still, they refused to bury their identified dead anywhere else but in Srebrenica.

Finally, in 2003, Bosnian Serb authorities relented under pressure and allowed the survivors to inaugurate the memorial cemetery for the victims in the town.

So far, the remains of more than 6,600 people have been found and buried at the cemetery. The remains of 50 more victims, recently found in mass graves and identified through DNA analysis, will be put to rest there on Monday.

Dozens of Srebrenica women testified before the UN war crimes tribunal for the former Yugoslavia, helping put behind bars close to 50 Bosnian Serb wartime officials, collectively sentenced to more than 700 years in prison.

“After my husband was killed and I stayed alone with our two children, I thought I will not be able to function, but the pain kept us going,” Abdurahmanovic said.

Brought up in a patriarchal society, Srebrenica women were expected to suffer in silence and not confront Serb leaders, who continue to downplay or even deny the 1995 massacre.

Instead, they changed their lives, setting up support groups, commemorating the victims and re-telling their trauma to everyone willing to listen, including queens, presidents, prime ministers, diplomats and journalists.

“The history of what happened in Srebrenica has been written in white marble headstones in the memorial cemetery, which would not have existed had we not insisted,” said Suhra Sinanovic, who lost her husband and 23 other close male relatives in the massacre.

She said Bosnian Serb authorities had underestimated the Srebrenica women.

“If, God forbid, a war was to break out in Bosnia again, maybe [the Serbs] would do things differently by letting the men live and killing the women,” she said.