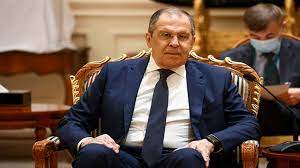 YANGON—Russia backs the Myanmar junta’s efforts to “stabilize” the crisis-wracked country, its foreign minister said on Wednesday during talks with top generals, according to Russian state media.

The Southeast Asian nation has been in chaos since the military’s power grab last year, with more than 2,100 people killed in a crackdown on dissent, according to a local monitor.

“We are in solidarity with the efforts [by the junta] aimed at stabilizing the situation in the country,” Sergei Lavrov said during talks in Myanmar’s capital Naypyitaw, according to the TASS news agency.

Russia is a major ally and arms supplier of the isolated junta, and has been accused by rights groups of arming the military with weapons used to attack civilians since last year’s coup.

“Next year, you will hold legislative elections and we wish you success in making your country even stronger and more prosperous,” Lavrov added, referring to proposed August 2023 elections that opponents of the coup have said will be neither free nor fair.

Lavrov is scheduled to travel on to an Association of Southeast Asian Nations (ASEAN) foreign ministers’ meeting in Cambodia from which the junta’s top diplomat has been excluded over its refusal to engage in dialogue with its opponents.

His visit comes after the junta sparked renewed international outrage last week when it announced it had executed four prisoners, including a former lawmaker and a democracy activist, in the country’s first use of capital punishment in decades.

ASEAN has been growing increasingly frustrated at Myanmar’s lack of progress on a five-point peace plan agreed last year.

He said the regional bloc was “disappointed and disturbed” by last month’s executions, and that the further use of capital punishment would mean a “rethink” of the five-point peace plan.

The junta has yet to comment on Lavrov’s visit.

With Western governments imposing sanctions following the coup and violent crackdown on dissent, the junta has turned increasingly to allies including China and Russia.

Junta chief Min Aung Hlaing was in Moscow on a “private” visit in July and reportedly met with officials from Moscow’s space and nuclear agencies.

The army has justified its power grab by alleging massive fraud during the 2020 elections, in which Daw Aung San Suu Kyi’s National League for Democracy (NLD) trounced a military-backed party.

Last year, it canceled the results of the polls, saying it had uncovered more than 11 million instances of voter fraud.

International observers said the voting was largely free and fair.