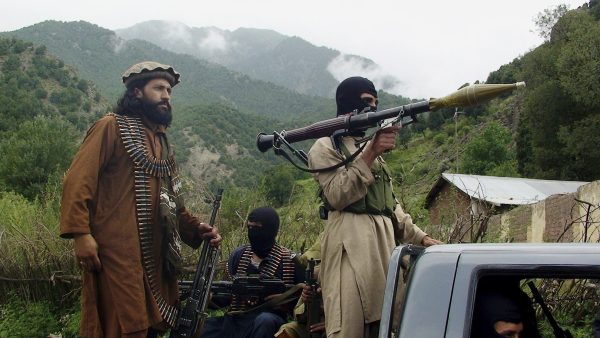 With the TTP’s history of failed agreements and its demand to establish exclusive control over the former FATA, why is Pakistan so keen on talks?

In this Aug. 5, 2012 file photo, Pakistani Taliban patrol in then their stronghold of Shawal in Pakistani tribal region of South Waziristan.

Inspired by the victory of the Afghan Taliban against the U.S./NATO and Afghan security forces in August 2021, the TTP’s war on Pakistan reached new heights in 2021, as it killed hundreds of troops and people through dozens of attacks across Pakistan. The renewed war led Pakistan to contemplate a “permanent” ceasefire with the proscribed group, and Islamabad even released top TTP commanders in May 2022 to facilitate the process.

In June, the Afghan Taliban announced an “indefinite” ceasefire between the TTP and Pakistan, adding that this could bring long-term peace. But no agreement has so far been reached due to a deadlock over the TTP’s demand to de-merge FATA from Khyber Pakhtunkhwa province and establish its own exclusive control over the region. An additional source of trouble is the TTP’s total refusal to renounce violence as a means of achieving its objectives.

To break the deadlock, on July 26 Pakistan sent a delegation of eight leading clerics to Kabul to hold talks with the TTP’s central leader, Noor Wali Mehsud. In June, in an interview given on YouTube, Mehsud categorically refused to back down from the TTP’s demand to have complete control of FATA, a tribal territory that was merged with Khyber Pakhtunkhwa in 2018 via the 25th amendment to Pakistan’s Constitution. The recent delegation, too, failed to convince Mehsud to change his stance.

There are good reasons for the TTP leader to refuse to back down. His position is strengthened, first and foremost, by the fact that these talks have been initiated by Pakistan out of its fear of another period of protracted war.

For years, Pakistan’s security establishment claimed to have wiped out terrorism, but the resurgence of the TTP post-August 2021 showed that the group had only relocated to Afghanistan in the wake of Pakistan’s various military operations in FATA. Following the Afghan Taliban’s takeover of Kabul, hundreds of TTP fighters imprisoned in Afghanistan by the Ghani regime were freed. That allowed Mehsud to regroup and reorganize the TTP, allowing him to renew its war on Pakistan.

The TTP is, therefore, talking from a position of strength, a fact recently highlighted by the United Nations Security Council’s ISIL and al-Qaeda sanctions monitoring committee’s 30th report on the presence and capability of various terror groups based in Afghanistan. As the report shows, the TTP currently has the “largest component” of 3,000 to 4,000 foreign fighters in Afghanistan.

As the UNSC report shows, Mehsud’s success in reuniting various TTP factions has made the group “more cohesive, presenting a greater threat in the region.” As the report mentions further, the TTP is working in alliance with other transnational jihadi networks, such as the East Turkestan Islamic Movement (ETIM), based in Afghanistan. The group is also tied to al-Qaida, as the February 2021 report of the UNSC showed that the anti-Pakistan group’s merger was facilitated by al-Qaida.

The TTP’s links with transnational jihadi networks plus its demands to retain control of its weapons and de-merge FATA strongly suggests that the group intends to use the peace process to gain control of its old stronghold not only as a sanctuary for its allies but also as a launch base for its new war on Pakistan.

Many in Pakistan believe that the TTP’s approach to the negotiations – offering peace in exchange for accepting the said demands – are only a prelude to another war. In the past, the group repeatedly failed to honor its agreements.

In May 2004, Pakistan signed an agreement with the then-leader of the Pakistani Taliban, Nek Mohammad of South Waziristan. The agreement called for a ceasefire, with the Pakistani state also agreeing to release Taliban fighters. The Taliban was allowed to retain its weapons. This agreement lasted only 50 days.

Therefore, with a history of failed agreements and the TTP’s demand to establish its exclusive control over the half a million people of FATA (according to the 2017 census), the question that needs to be asked is: Why is Pakistan pushing for talks at this particular juncture?

There are a number of domestic, regional and international reasons for this.

First of all, Pakistan’s present economic condition does not warrant another war. Pakistan’s rupee is trading at a historic low vis-à-vis the U.S. dollar. Pakistan’s foreign exchange reserves fell below $9 billion in June. With experts predicting a doomsday scenario, if not default, there is little room for starting a war that could consume billions.

While Pakistan was able to undertake sizable military operations against terrorist groups in the past, a crucial source of help was the coalition support fund provided by the United States. The U.S. exit from Afghanistan and the end of the “war on terror” mean that external help is unlikely to become available.

China, Pakistan’s so-called “all-weather” friend, too, is unlikely to offer any help. On the contrary, the fact that the TTP has attacked China-Pakistan Economic Corridor (CPEC) projects and Chinese personnel working in Pakistan many times has led China – as one Pakistani diplomatic official said on the condition of anonymity – to “suggest” that Pakistan “make peace” with the Taliban to allow for a smooth implementation of CPEC.

As the official further said, the Chinese want Pakistan to follow their lead. In March, the Chinese foreign minister told his Afghan counterpart that Beijing respects their traditions and way of living, indicating that Beijing does not intend to interfere as long as the Afghan Taliban can ensure that their land is not used against China. “China wants us to do something like this” to ensure its projects are not attacked, revealed the official.

If Pakistan fails to ensure the security of Chinese projects and personnel, it could lead, Pakistan fears, to an exit of Chinese capital from Pakistan, which will put unbearable pressure on the country.

While Pakistan has many reasons to engage with the TTP and the announcement of an “indefinite” ceasefire might be an encouraging sign, accepting the group’s demands regarding the tribal region is “tantamount to creating a state within the state,” said the official.

What is worse is that Pakistan lacks any “significant chips to bargain with.” The Afghan Taliban are willing to mediate, but their influence on the TTP is limited. As Noor Wali Mehsud indicated in an earlier interview with CNN, the group could ally with the Islamic State Khorasan Province (ISKP) if pushed too much to give up core demands. With the Afghan Taliban itself fighting the ISKP, it is unlikely to pressure the TTP either.

Pakistan, therefore, faces hard choices only. While talks could still succeed and “peace” could come to FATA, it will be an extremely risky venture taken in unchartered territory. In all likelihood, this form of peace would eventually lead to another war.