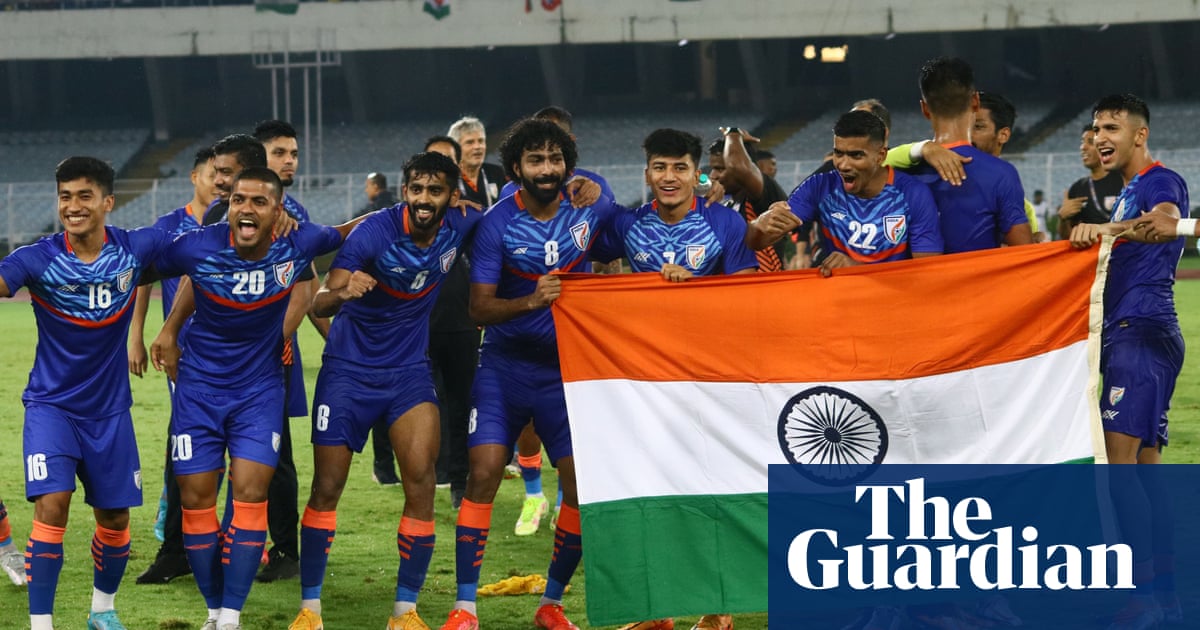 Show caption India celebrate this month’s win over Hong Kong in an Asian Cup qualifier. Photograph: Dipa Chakraborty/Pacific Press/Shutterstock Football Threat of Fifa ban looms over India and Chhetri’s hopes of passing Messi Turmoil at India’s FA could lead to ban and the national coach, Igor Stimac, has warned those in charge to ‘wake up’ John Duerden Mon 20 Jun 2022 11.13 BST Share on Facebook

If Estonia had not conceded five goals to Lionel Messi this month, India’s legendary striker Sunil Chhetri would be second behind Cristiano Ronaldo in the highest active international goalscorers’ list. The 37-year-old has 84, two behind the Argentinian, after scoring four in the just-finished third round of qualification for the 2023 Asian Cup.

That haul helped India win all three games and stroll to a second successive appearance at the continent’s biggest event. Chhetri is a little concerned, however, that he may not be able to participate in the tournament – and not because there is currently no host after China relinquished those duties last month. The worry is that India may be hit with a Fifa ban.

“I hope everything will come out as good for the sport and the country does not get a ban,” Chhetri said this month. “The ban will be catastrophic not just for the whole country but for me, because I’m 37. You never know when there’s the last game for you.” After the captain said his piece, the national team coach, Igor Stimac, told those running the game in the country of 1.4 billion to “wake up”.

Although the national team are becoming regulars at the continental competition, the All India Football Federation (AIFF) has been in turmoil. Praful Patel replaced Priya Ranjan Dasmunsi, who had been in charge since 1988 but ended his tenure bed-ridden, as president in 2008. The rise of Patel, a Fifa Council member and Asian Football Confederation vice-president, in the football world has been smoother than India’s. During his tenure, the fortunes of the various national teams have fluctuated, facilities have improved but the domestic game is in flux because of restructuring, and the AIFF’s signing of a 15-year commercial deal with Reliance in 2010 is still a controversial subject.

In March the sports ministry gave its verdict and reduced its funding of the federation by 85% for 2022-23 compared with the 2019-20 figure, with reports suggesting it was due to the poor performance of the national team, disappointment at the performances of various age-level sides and concerns over women’s football. The AIFF was advised to focus on the grassroots. The supreme court was told to sort out the federation’s election situation.

This spelled the end of Patel’s tenure. His third term, the maximum allowed, finished in December 2020 but a new election, in which he would not be able to stand, was not held (according to Patel there was a constitutional issue that had to be sorted first) and he stayed in place. The court appointed a three-man committee of administrators (CoA) to take charge. It was originally hoped that new elections could be held by the end of June. Now the talk is of September.

Fifa may have something to say about that. Other Asian nations such as Kuwait and Indonesia have been hit with bans in recent years for what the governing body saw as government interference in the running of the federation. Officials are visiting India on Monday to check out what has been going on. “I don’t think Fifa would have an objection to this development,” said Dr SY Quraishi, one of the three administrators. “Football elections were long overdue, the erstwhile team had stayed on past its tenure and elections were necessary. I don’t see a noncompliance issue with Fifa here. We hope that Fifa will understand and cooperate and we will cooperate with them as we try to finish this task given to us by the court.”

In 2018, Pakistan’s supreme court ordered football federation elections that were won by Ashfaq Hussain. His victory was never recognised by Fifa and he led a group that stormed the Pakistan federation’s headquarters in Lahore in March 2021, throwing out Fifa’s normalisation committee. The chaos remains, as does the ban. India is different to Pakistan, which is a country that loves the game but has almost fallen off Asian football’s radar with self-interested leaders and a national team who have played seven games in seven years and none since 2019. Fifa has given a lot more attention to India, with Gianni Infantino, like Sepp Blatter before, a regular visitor to New Delhi, and it has provided more investment.

The country staged the 2017 under-17 men’s World Cup and will do the same for the women in October. The 2022 Women’s Asian Cup took place in January and despite a slightly embarrassing start when the host team had to withdraw after Covid breached their bubble, it went pretty well in the end and the final, with China edging out South Korea, was a thriller. India has bid to host the men’s 2027 Asian Cup, the continent’s biggest football competition. Staging that tournament at some point is seen as a necessary step on the road to the World Cup coming to the subcontinent.

Recent events are a blow to Indian prestige but would be nothing compared with a Fifa ban. Such an outcome is unlikely but nobody wants the situation to drag. With major reforms taking place in domestic competitions and a decision over the 2027 Asian Cup venue coming soon, now is the time for those in charge to do what coach Stimac says and “wake up”, otherwise the only winner in the whole situation may well be Lionel Messi.