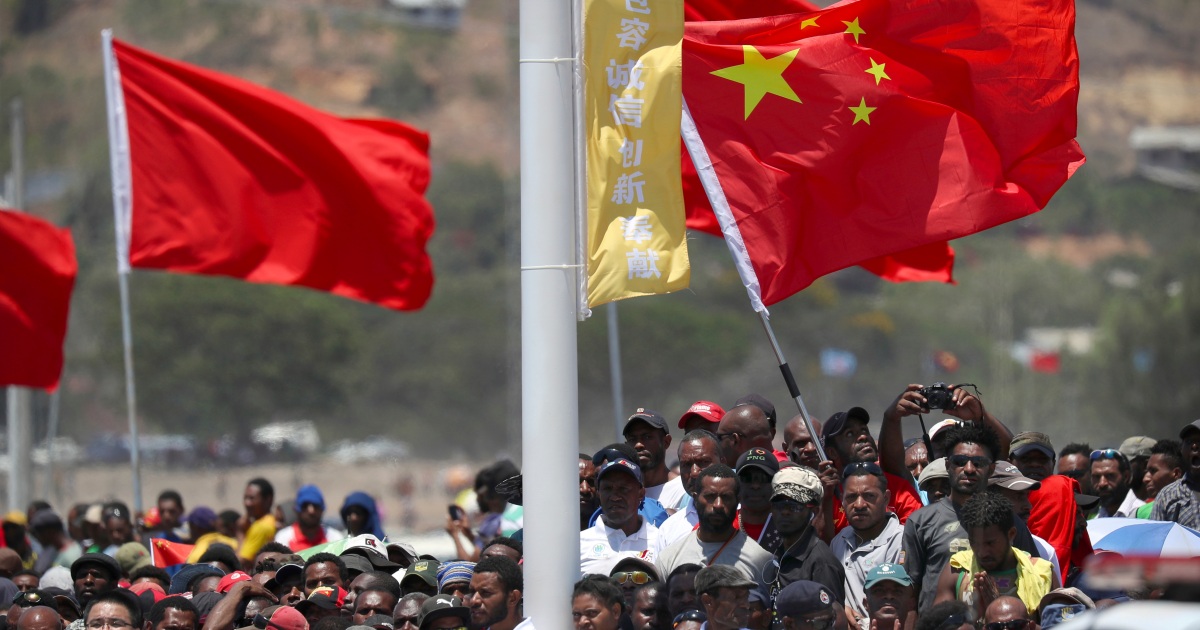 China will reportedly seek a wide-ranging security and economic deal with 10 Pacific states during Foreign Minister Wang Yi’s trip to the region this week, according to the Reuters news agency.

Wang is due to land in the Solomon Islands on Thursday at the start of a 10-day tour that will also take him to Kiribati, Samoa, Fiji, Tonga, Vanuatu, Papua New Guinea and East Timor between May 26 and June 4.

During the trip, Wang will take part in the second China-Pacific Island Foreign Ministers’ Meeting in Fiji where he is expected to push for a five-year action plan and a joint communiqué.

The draft of that communiqué, which was shared with Reuters, details how China and the Pacific nations can “strengthen exchanges and cooperation in the fields of traditional and non-traditional security”.

Details include a planned China-Pacific Islands Free Trade Area, but also agreements on police training and law enforcement operations, as well as plans to cooperate on data networks, cybersecurity and smart customs.

The last point would give Chinese tech giant Huawei the green light to enter the Pacific market and build 5G networks.

The company has been barred from operating in several Western and US-allied countries due to security concerns around its close ties to the Chinese state. The United States and Australia have until now also blocked Huawei from building submarine cables and mobile networks in the Pacific, according to Reuters.

The draft plan has alarmed at least one Pacific country, the Federated States of Micronesia, which is a close ally of the US.

President David Panuelo reportedly sent a letter to other heads of state in the region urging them not to accept the communiqué, which would give undue leverage to China, according to a letter seen by the news agency.

He also warned it could upset tensions in the Pacific and help set off another ‘Cold War’ between China and the US.

“The practical impacts … of Chinese control over our communications infrastructure, our ocean territory and the resources within them, and our security space, aside from impacts on our sovereignty, is that it increases the chances of China getting into conflict with Australia, Japan, the United States and New Zealand,” he was quoted as saying.

The letter, however, also contained some criticism of Australia, whose lack of engagement with the Pacific has been cited as a key reason China has gained a foothold in some countries in the region after the Solomon Islands signed a security pact with Beijing earlier this year.

Ned Price, US State Department spokesperson, said on Wednesday that the Pacific should be wary of a potential deal and expressed concern it had been “negotiated in a rushed, non-transparent process”.

“It’s worth noting that [China] has a pattern of offering shadowy, vague deals with little transparency or regional consultation in areas related to fishing, related to resource management, development assistance, and more recently, even security practices,” he told reporters.

He also said the prospect of a security agreement was concerning and would “only seek to fuel regional and international tensions and increase concerns over Beijing’s expansion of internal – of its internal security apparatus to the Pacific”.

Australia’s newly-appointed Foreign Minister Penny Wong is also on her way to the Pacific less than a week after taking office.

She was flying to Fiji on Thursday and was expected to meet Prime Minister Frank Bainimarama as well as the secretary-general of the Pacific Islands Forum, Henry Puna.

“The visit, in my first week as Foreign Minister, demonstrates the importance we place on our relationship with Fiji and on our Pacific engagement,” Wong was quoted as saying by Australian public broadcaster ABC.

“Australia will listen to our Pacific partners as we work together to face our shared challenges and achieve our shared goals — including tackling climate change, pandemic recovery, economic development and regional security.”