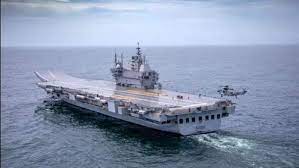 India will purchase 26 fighter jets for the INS Vikrant on a G-2-G basis.

The carrier-based fighter acquisition by the Indian Navy will be part of a larger arrangement with the country selected as India is looking to manufacture fighter aircraft engines under the “Atmanirbhar Bharat” plan.

With the indigenous twin-engine deck-based fighter a decade away, the Narendra Modi government will be buying 26 carrier-based fighters for soon to be commissioned INS Vikrant on a government-to-government basis on the recommendation of the Indian Navy.

While the flight test trials of options French Rafale-Marine have already been conducted at the Indian Navy’s shore-based test facility in Goa this January, the trials of US F-18 super hornet are expected to be completed by June 15. Out of the 26 aircraft, the Indian Navy wants 8 twin seater trainers, which can also be used in combat conditions. Both the fighters are virtually of same vintage and both the manufacturers have maintenance, repairs, and overhaul facilities in India.

Both the aircraft have undergone intensive trials at the test facility in Goa but have not landed on India’s sole aircraft carrier, INS Vikramaditya, as it is under major maintenance in Karwar and expected to start sailing later in June. India’s indigenous aircraft carrier INS Vikrant is undergoing sea trials and is expected to be commissioned by Prime Minister Narendra Modi on August 15, 2022.

According to South Block officials, India is not looking to lease fighters for INS Vikrant but will go for outright G-to-G purchase of the deck-based fighters from either French Dassault or US Boeing, based on the evaluation of Indian Navy’s aviation wing. Both the companies have dealt with the Indian Air Force with Dassault selling Rafale fighters and Boeing selling P8I anti-submarine warfare platform, Chinook helicopters and C-17 heavy lift aircraft. The two aircraft have proven track records with F-18 being tested in Afghan and Iraq wars by the US Navy.

The carrier-based fighter deal is expected to be linked with a larger strategic arrangement with the country involved as New Delhi is looking for aircraft engine manufacturing under the “Atmanirbhar Bharat” initiative with the participation of Indian private sector companies. While French Safran is keen to manufacture 100 kilo newton engines with Indian entities without any pre-conditions, Defence Ministry is also exploring the same with the US as the GE-404 engine is used in the indigenous Tejas fighter and GE-414 being considered for the twin engine advanced multi-role combat aircraft (AMCA) project of the DRDO.