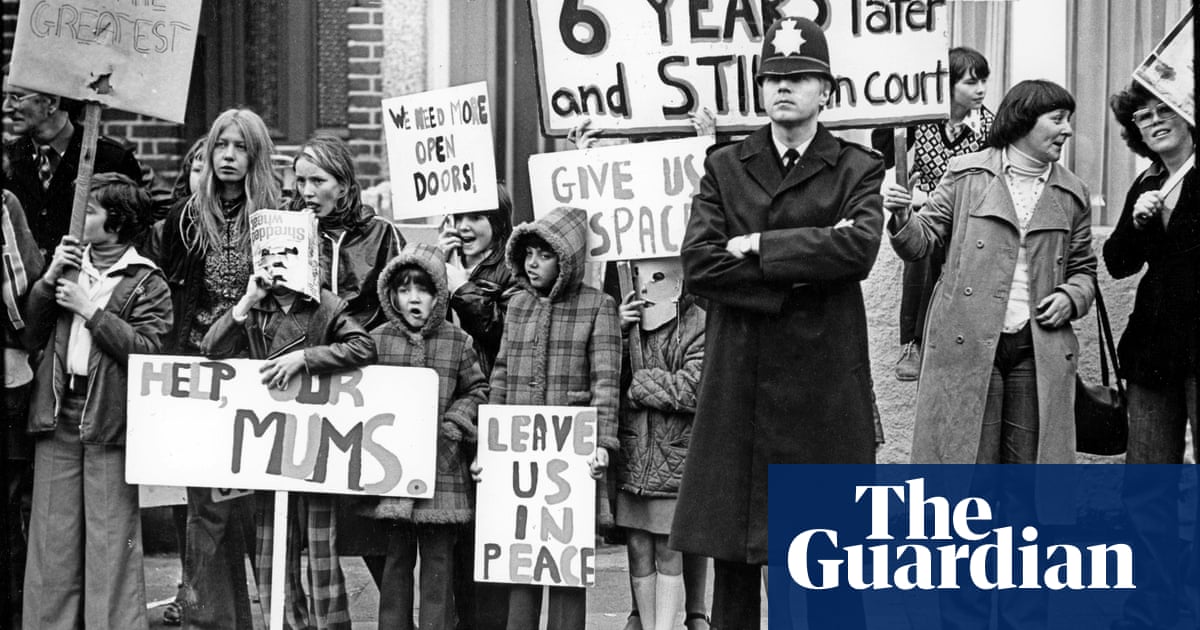 Refuge chief Ruth Davison: ‘We face a growing need, but there is optimism’

Show caption Undated photo of supporters of Chiswick Women’s Aid. Carol Messenger, who spent five years on and off at its first safe house, is seen here holding the ‘leave us in peace’ banner. Photograph: Sally and Richard Greenhill/Alamy Domestic violence Refuge chief Ruth Davison: ‘We face a growing need, but there is optimism’ Demand for domestic abuse support services shows little sign of abating but there is hope of real change Alexandra Topping Tue 4 Jan 2022 06.00 GMT Share on Facebook

Half a century since the world’s first safe house for women and children escaping domestic violence opened in Chiswick, west London, the CEO of the charity it grew into has said demand for its services remains almost as high as during the peak of the Covid pandemic, and technology is increasingly being used as a tool of abuse.

Refuge, like other domestic abuse support services, reported a surge in demand during the pandemic, as police warned that abusers had “weaponised” the virus while vulnerable women were trapped at home.

The demand shows little sign of abating, says Refuge’s chief executive, Ruth Davison, who took up her post in February. Calls to the national domestic abuse helpline operated by Refuge increased by 61% between April 2020 and February 2021. “It’s now levelled off, but at a new level of demand,” said Davison.

Pre-Covid, Refuge’s helpline was logging about 4,600 incoming contacts a month, including through a newly introduced live chat function online. The figure rose to 8,000 a month in the first lockdown and again in the second, and is now at about 7,000 a month.

In a similar period, the charity reported a 97% increase in complex tech abuse cases, which include social media abuse but also more subtle forms of abuse such as the manipulation of smart heating, doorbell cameras or online banking. A recent example involved an abusive ex-partner implanting a listening device in the toy of a child with shared custody.

“We hear really quite awful stories,” says Davison. “It’s really very pervasive. There are many ways in which technology is being misused by perpetrators to harm women and children.”

There has been some progress in the last year, says Davison, pointing to the passing of the Domestic Abuse Act, which put a legal duty on local authorities to fund refuges, recognised children as victims for the first time, recognised economic abuse as a form of domestic abuse, and abolished the “rough sex” defence.

But despite vocal lobbying, the bill does not protect migrant women. “Right now there are some groups of women, women with no recourse to public funds, migrant women, disabled women, who will have a very different experience accessing services – that has to change,” says Davison. This year the charity would continue lobbying for better online protection for women in the police, crime, sentencing and courts bill and the online harms bill.

Things have changed massively since the first refuge was set up in 1993 by the Chiswick Women’s Aid founders, Erin Pizzey and Anne Ashby, in 1971. Carol Messenger was four years old when her mother took her and her sister from Manchester to the houseat 2 Belmont Terrace in Chiswick. She recalls that the first house was known as the battered wives’ home, “not very PC, but that’s what we all called it. In fact, someone graffitied it on the front of the building at one point. It was there for a long time.”

She remembers that during the five years she spent on and off there, the house was full to bursting with mattresses, some even put in the kitchen at times. She also recalls going on marches, and squatting houses to get accommodation. “They would literally get a bunch of women, a bunch of kids and get into the houses, and they’d set us up with camping stoves and lights and eventually take them over in some cases.”

Pizzey is no longer associated with Refuge, and she has been criticised for expressing the view that often women are as culpable for domestic abuse as men.

Davison diplomatically says they have never met, but says that even if Pizzey’s views havehad changed, the women’s sector owes her a debt of gratitude. “She has saved hundreds of thousands of women’s lives, because she started something that’s led into a movement. Some of it she would recognise, some of it she probably wouldn’t, but all of it came from that really brave decision.”

Refuge may no longer squat premises but it is as deeply political as ever, says Davison. And after a year in which rape prosecution rates fell to record lows, and a series of high-profile killings – such as those of Bibaa Henry and Nicole Smallman, and of Sarah Everard by a serving police officer – sparked public outrage, the charity is needed more than ever, she says.

“The bottom line is in England, Wales, two women a week are murdered by their current or former partner, and one in four women are affected by domestic abuse,” Davison says, adding that there is a “strange tension” between optimism and dismay in the sector.

“We face a very bleak reality and a growing need, but there is huge optimism and hope of what the kind of anger we have seen [in the last] year can create,” she says. “My hope is that we see a real change in public dialogue and really try to address the root causes of men’s violence and understand why we tolerated this for so long in this country.”

In 50 years’ time, Davison hopes the need for Refuge to exist will be greatly diminished. “Our vision as a charity is that we will live in a world where domestic abuse is no longer tolerated,” she says. “That’s what we work for every day. There’s still a long road ahead.”

Published in Nation and News