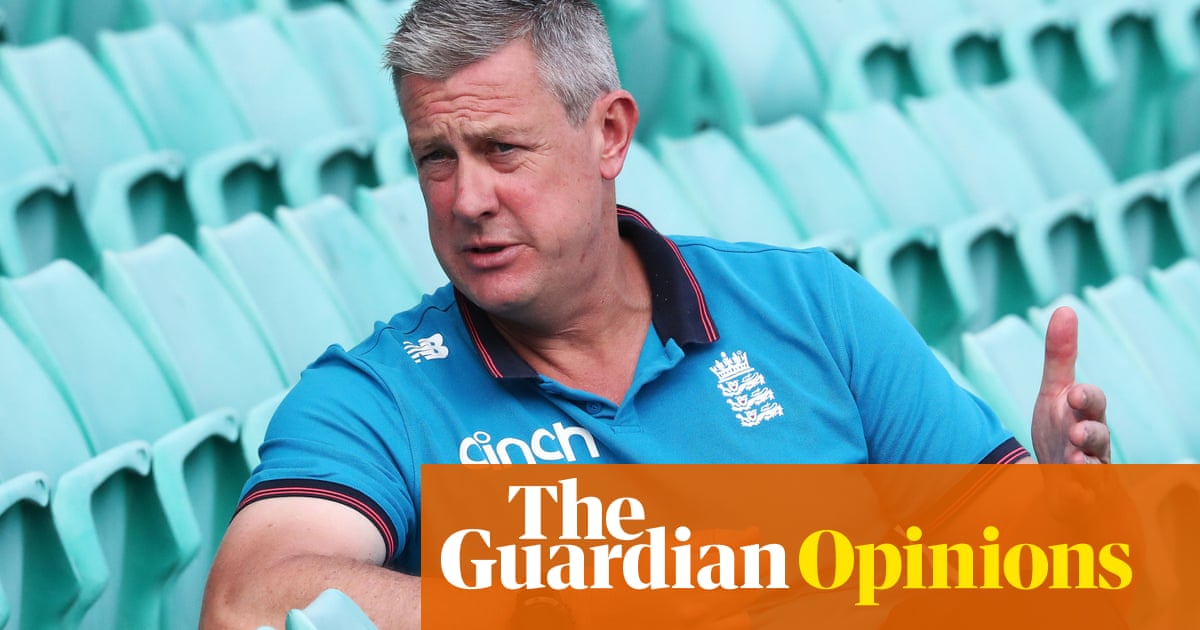 Show caption Ashley Giles during a press conference at the Sydney Cricket Ground on Tuesday. Photograph: Jason O’Brien/PA Giles’s scattergun broadsides suggest a man who has gone as far as he can Andy Bull The ECB managing director of men’s cricket came across as thin-skinned and indignant as he attempted to explain Ashes failure Wed 5 Jan 2022 15.30 GMT Share on Facebook

Back in 2005, Ashley Giles played what is still one of my favourite Test innings, when he made 59 on the fifth day of the fifth Test at the Oval. It was his top score in Test cricket at the time his team needed it the most. And because it was played in the shadow of Kevin Pietersen’s 158 at the other end, it went almost unnoticed. Which felt characteristic. Giles always seemed like that team’s Guildenstern, a steady lower-order bat and a spinner who often didn’t turn the ball at all. We called him the Wheelie Bin because of his ungainly action, or the King of Spain, because of a misprint on a souvenir mug.

He hated the nicknames, and, understandably enough, resented the idea that he was being laughed at. Because, of course, he took his game seriously. He had to. Giles operated on the reaches of his own talent, and it was hard work out there. There was a prickliness to him that occasionally burst into the open. Like the time he marched into the press box in 2007 and confronted a journalist who had teased him in print for having the “temerity to remark that Tendulkar’s batting prowess had waned a little”. Giles didn’t like that at all. The journalist explained he was only being ironic. “What’s irony?” Giles shouted.

You could hear some of that side of him in his latest interviews in Australia where, as the England and Wales Cricket Board’s managing director of men’s cricket, he had to try to explain how and why England had managed to make such a mess of an Ashes series for which they had spent two years planning.

It was an odd interview, which contained criticisms of previous England teams (“in the 90s that was accepted as normal for England leaderships and they got away with it, we set our standards much higher than that”), of “armchair selectors”, of England’s spinners (“we’ve got to have a spin resource that allows us to bowl much more overs of spin”), of fast bowlers (“we need a variation in our bowling attack but we need pace”), and of batsmen (“with first innings scores of 147, 236, 185, we’re not winning many Test matches”), as well as digs at county cricket (“I think there is a dearth of leadership and in the county game”) and the international schedule.

Giles also said he was at peace with the idea that he was accountable for it all. He just didn’t sound like he believed it. He came across as thin-skinned and indignant that he wasn’t being given more credit for his own modest achievements. “When I came into the job we were fifth in the world in Test cricket, third in the world in Twenty20 cricket and No 1 in the world in ODIs. We’re now fourth, first in T20 and second in ODIs.”

Ashley Giles chats to England captain Joe Root prior to day one of the fourth Ashes Test at the Sydney Cricket Ground. Photograph: Jason O’Brien/PA

Now Giles is working on his review of what went wrong. He said he didn’t want to go into his ideas for “how I want to take this team forward and improve our red-ball cricket”, but he still gave a good idea of what his conclusions are likely to be. “It’s been an extraordinary year and I think we can look at the cricket-specific stuff but we also need to look at the other stuff, particularly having 18 scheduled Test matches,” he said. “It’s a huge amount of cricket we’re playing and in a time of Covid it’s been pretty horrendous at times.” The players are reaching “their very top limit” of what they can deal with.

On top of that, Giles said, what is needed now is systemic change, collective responsibility, and collective solutions. “We can make whatever changes we want. You can change me, change the head coach, change the captain. But we’re only setting up future leaders for failure.” Which underplays the degree to which getting the leadership team in place could transform the sport in this country. In the short term, the difference between a good side and a bad one often is as simple as a change in the coach and the team culture. Just ask Eddie Jones. And the simple truth is, everything is better in English cricket when the England team are winning.

If Giles is right and more systemic change is needed, the pressing question is whether, given his track record in the job, he is the right man to lead it, given that he made such a mess of the (well-intentioned) rotation policy, and the mistake of binning the head selector to load more responsibility onto the coach.

Same goes for Tom Harrison, the ECB’s chief executive, who, though not directly responsible for the England team’s performance, has had a hand in the congested schedule, the collapse of the Pakistan tour, the mismanagement of the racism scandal, and who also blew a ridiculous amount on a needless launch of a divisive new competition, the Hundred, which is now the single greatest obstacle to sorting out the first-class cricket schedule. And yet Harrison continues.

As for Giles, he looks now like he did as a player; a man trying hard to prove he can do it but who has gone as far as he can on the talents he has. “This is a good bunch of guys here,” the 48-year-old said. No one ever said they weren’t. No one ever said that was the point, either.