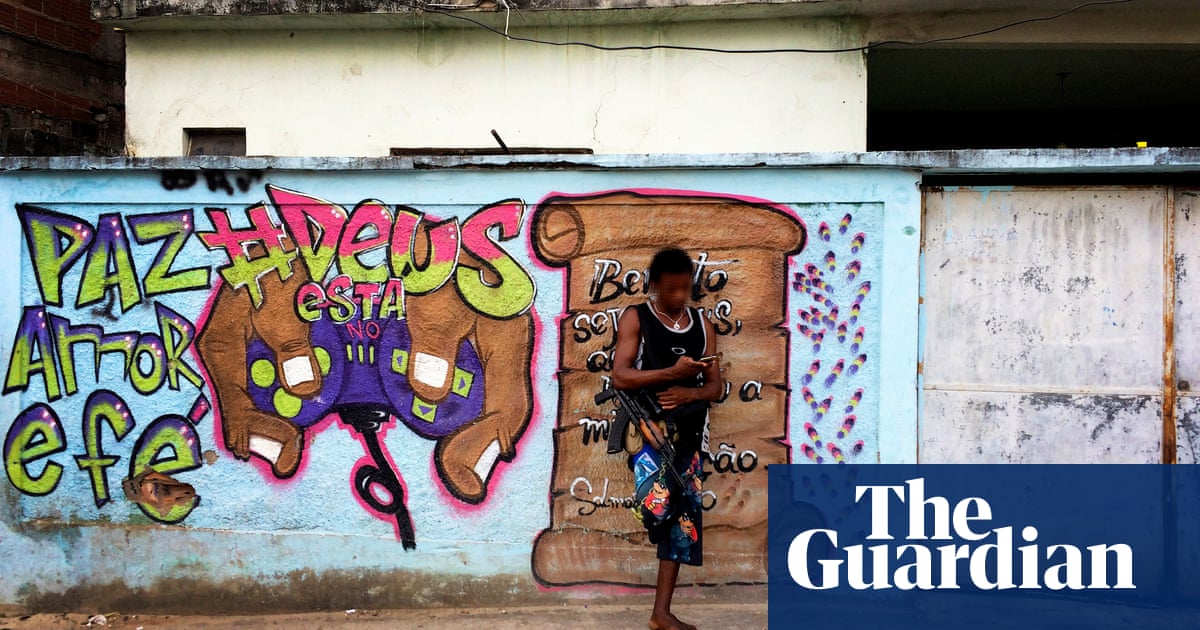 “Pastor, do you think we could hold a service at my house next Thursday?” the peroxide-haired gangster wondered, cradling an AK-47 in his lap as he took a seat beside the man of God.

A few months earlier, the 23-year-old had bought his first home with the fruits of his illegal work as a footsoldier for one of Rio de Janeiro’s drug factions. Now, he wanted to give thanks for the blessings he believed he had received from above.

“I’ve dodged death so many times. It was He who delivered me from evil,” the drug trafficker reflected as he began another 12-hour night shift on the frontline of the Brazilian city’s drug conflict.

That Christian conviction was echoed all around the young outlaw, on walls adorned with frescoes of the Old City of Jerusalem and an extract from the Epistle to the Galatians: “Walk by the Spirit, and ye shall not fulfil the lust of the flesh.”

The gangster’s body celebrated his religion, too. One wrist carried a tattoo of a cross and the words “Jesus lives”. The other featured the motto: “May my courage be greater than my fear and my strength as great as my faith”.

“They know theirs is a cut-throat world so they seek something to believe in,” said Elias Santana, a favela-based preacher who has made it his mission to save the souls of Rio’s ever more evangelical gangsters.

Facebook Twitter Pastor Elias Santana prays for one of the young gang members he is trying to lure from a life of crime. Photograph: Alan Lima/The Guardian

When Rio’s drug conflict exploded in the 1980s, Brazil’s evangelical revolution was still gathering pace and many gangsters looked to Afro-Brazilian deities such as Ogum, the God of war, for protection. Drug bosses frequented Afro-Brazilian temples, built shrines to Orixás and wore necklaces to show their devotion to the Umbanda and Candomblé faiths.

Four decades later, many of those sanctuaries have been replaced with sculptures of Bibles and murals of the Last Supper, as a new generation of born-again criminals takes power, influenced by a brotherhood of pentecostal preachers.

The sway those pastors hold over Rio’s so-called “narco-pentecostals” is unmissable in the hundreds of favelas controlled by gunmen from its three main gangs: the Red Command (CV), the Friends of the Friends (A) and, perhaps the most evangelical of all, the Pure Third Command (TCP).

Drug lords, some regular churchgoers, have incorporated Christian symbols into their ultra-violent trade. Packets of cocaine, handguns and uniforms are emblazoned with the Star of David – a reference to the Pentecostal belief that the return of Jews to Israel represents progress towards the second coming. Gang-commissioned graffiti offers spiritual guidance and heavenly praise.

On one recent evening, a senior trafficker wandered into a service in suburban Rio, unarmed and unannounced, as a preacher read from the Book of John. “I have come into the world as a light, so that no one who believes in me should stay in darkness.” Surrounded by local children and their smartly-dressed parents, the gangster took a white plastic chair in the corner, bowed his head and began to pray.

Nowhere is the evangelisation of Rio’s underworld more visible than the Complexo de Israel, a cluster of five favelas near the international airport governed by Peixão (“Big Fish”), a preacher turned drug peddler who takes his nickname from the ichthys “Jesus” fish. (The drug lord’s second-in-command is named after the Judaean prophet Jeremiah, while their troops are known as the Army of the Living God).

In tribute to the area’s boss, a mural of the cartoon character Fishtronaut has been painted at one entrance, framed by a line from Psalm 33: “Blessed is the nation whose God is the Lord”.

A neon Star of David, at night visible for miles around, sits on a water tower at one of the complex’s highest points. Nearby, on an outcrop looking south towards Rio’s Christ the Redeemer statue, a Bible sits in a display case. “Rescue me, O Lord, from evil men,” reads its inscription, from Psalm 140. “Protect me from men of violence who devise evil plans in their hearts and stir up war every day.”

Police call Peixão, who is wanted for dozens of crimes including torture, murder and concealment of death, one of Rio’s most ambitious and iron-handed villains, whose fast-growing criminal empire makes a mockery of his purported Christian faith. In 2019 he was accused of leading the Bonde de Jesus (Jesus Crew), a gang of rifle-toting extremists who allegedly ransacked a succession of Afro-Brazilian temples. Afro-Brazilian celebrations have reportedly been outlawed in the Complex of Israel.

Facebook Twitter A drug trafficker stands next to a mural of Psalm 18: ‘The Lord is my rock and my fortress and my deliverer’. Photograph: Alan Lima/The Guardian

But some residents say the bling-averse gangster’s Bible-infused “doctrine” – which includes keeping the community’s streets tidy and well-lit, acts of charity to impoverished locals, discouraging swearing and drug use among gang members and a military-style focus on discipline – has improved life in a ghetto long neglected by the state.

“There’s order in the favela,” said Juju Rude, a local rapper whose songs describe life in a community ruled by God-fearing gangsters.

The Afro-Brazilian musician, who identifies as an evangelical Christian and has an Uzi tattoed on her belly, said she was troubled by Rio’s surge in faith-related bigotry and violence. “It’s not cool to see people prevented from practising their faith in the place where they live.”

Overall, however, she thought life had improved under the favela’s current churchgoing administrator: “It’s new for everyone, an environment like this.”

Facebook Twitter Juju Rude, a Brazilian rapper who lives in the Complexo de Israel and whose songs describe life in a community ruled by God-fearing gangsters. Photograph: Alan Lima/The Guardian

Rio’s narco-pentecostals admit their often brutal line of work clashes with the scripture they profess to follow. As one top trafficker in another gang-run part of town lounged on top of a Honda motorbike surrounded by bodyguards with automatic rifles, he acknowledged the drug trade was an “evil” business that sometimes entailed horrific violence.

But the gangster claimed his faith inspired him to minimise the barbarity, by trying to persuade fellow criminals to spare those who crossed them. “Those I can save, I save,” he said, remembering how he once persuaded a colleague not to murder a trafficker who stole a weapon and defected to a rival group.

Instead, the traitor was forced to clasp his hands together, as if in prayer, and shot at close range, shattering his metacarpal bones but preserving his life.

In another favela, a footsoldier with a Bible tattooed on to his chest spoke of how he enjoyed attending services at the God is Love pentecostal church, a fundamentalist congregation with temples across the US and Europe. “It makes me feel lighter,” he said, before racing away on his motorbike with an AR-15 slung over his shoulder.

Christina Vital, an academic who has spent nearly 30 years studying evangelism’s advance into gangland Rio, said it was inevitable traffickers had embraced Christianity, given the breathtaking evangelical tsunami that has swept over Brazilian society during that time. Evangelicals now occupied key positions in the world of crime, just as they did in the media, politics, judiciary and culture, she said.

Facebook Twitter Rifle-carrying drug traffickers listen to an evangelical service outside a church on the outskirts of Rio. Photograph: Alan Lima/The Guardian

Nor was it surprising that vulnerable, marginalised young men sought guidance and compassion from the preachers searching Rio’s favelas for souls: “It’s such an awful, fragile life. They live in fear.”

Vital said the consequences of the improbable fusion between crime and Christianity were unclear. There was evidence of “a certain containment” of bloodshed, she said, but the blending of religious intolerance with “staggering” gang violence was disturbing.

Pastor Elias said he respected all faiths and believed his Godly crusade was helping pacify a city where hundreds of mostly young, black lives are lost each year. “This is Christianity’s duty: to save.”

A week after being invited to bless the footsoldier’s first home, the preacher donned a garish magenta shirt and set off down winding, muddy passageways to the modest first-floor abode for which the criminal had paid 8,000 reais (£1,000).

He squeezed inside, accompanied by half a dozen Bible-carrying helpers, and the group began to sing an anthem called “Oh! Jesus Loves me”. “Far from the Lord, I walked, on the path of horror. Never did I ask about Jesus. Nor did I seek His love,” they sung as the gangster bowed his head.

When the singing stopped, a female church member stepped forward and clutched the host’s arm as his girlfriend and mother – a cleaner just home from work – looked on. “God has chosen you. God is here right now!” the woman told him. “Just look at my goosebumps! God is here!” she proclaimed, her voice trembling as she summoned an angel to watch over the trafficker’s life.

After 20 minutes of prayer and a reading from Psalm 23, the trafficker thanked his visitors over hotdogs and led them outside, visibly moved by their words.

“It’s a life of loneliness,” said the pastor, “and Christ has come to free them from this servitude.”

A warm breeze coursed through the favela’s narrow back alleys and for a moment the world seemed at peace – but the calm lasted only two hours.

Shortly after midnight the crackle of gunfire woke residents, as traffickers stormed a nearby neighbourhood in the hope of expanding their domain. Another night of chaos and heartbreak in a city crying out to be saved.