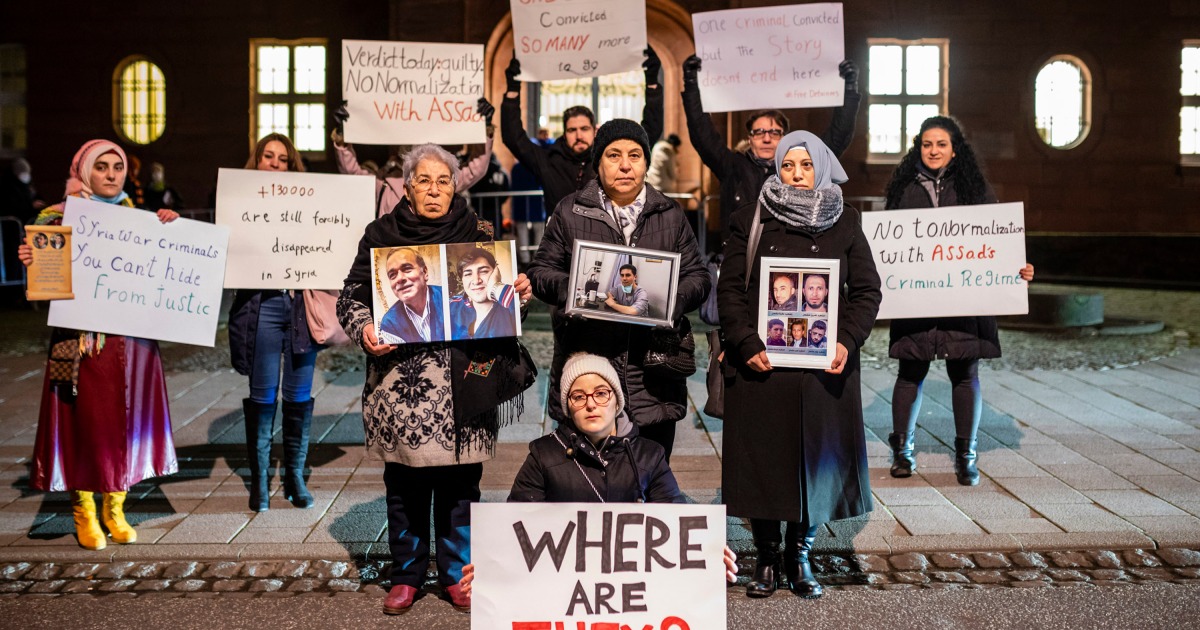 Koblenz trial: One small step towards justice for Syria

I thought I would never see my torturer face justice. I did, and I hope all Syrian victims find justice as well.

On January 13, a court in the small German town of Koblenz sentenced Anwar Raslan, a former Syrian intelligence officer, to life in prison for crimes against humanity. The verdict will not bring justice to all Syrians, but it is nevertheless a momentous achievement.

For thousands of survivors like me, who were unjustly detained, interrogated and brutally tortured at the al-Khatib state security branch in Damascus, which he headed between 2011 and 2012, it was a day we thought we would never see. During the time he was in charge, more than 4,000 people were tortured there, at least 58 are believed to have died as a result.

I was detained twice – once in 2011 and then in 2012 after a raid on the Syrian Center for Media and Freedom of Expression where I worked, advocating free speech. The first time, I was taken to al-Khatib state security branch – widely known as Branch 251 – for interrogation, where I was detained in secret, beaten and tortured. The second time, I was taken to an air force intelligence branch.

Back in Syria, we could only dream that we would one day see one of the regime’s criminals in court on trial for their crimes.

While Anwar Raslan is just one of the hundreds of members of Bashar al-Assad’s security and intelligence apparatus who are responsible for state-sponsored torture and countless other atrocities over the past 10 and a half years, his individual conviction carries a much wider meaning. It is a damning legal indictment of the Syrian regime as a whole.

Under international law, the very definition of crimes against humanity is that they constitute a widespread and systematic attack against the civilian population. This individual conviction provides concrete proof of the horrors perpetrated by the regime on a mass scale.

For any states contemplating re-establishing ties with al-Assad or forcing refugees to return to Syria, it is an important reminder of what the Syrian regime is capable of.

Yet a part of me remains heartbroken. It is hard to welcome the news when there are tens of thousands of people less fortunate than me who remain forcibly disappeared, detained in al-Assad’s notorious prisons. For them, justice is nowhere in sight.

Nothing can truly describe the horror of being disappeared in Syria. Syrian intelligence officers call it “disappearing behind the sun”. The phrase means to live in darkness; to be banished from life. It is a living death.

After a few days of being confined in a small dark place, you no longer know whether it is night or day. Light and darkness become meaningless. It is almost as if you no longer exist at all. You forget the small details of life – what trees look like or what flowers smell like.

After my release in 2015, I fled Syria largely because of the terror I experienced at the hands of security and intelligence officers, including Raslan. I left Syria because I feared I would be seized again and did not want my family to be haunted by the endless uncertainty over my fate, forever wondering: is he dead or alive? Are they torturing him this very moment? Is his body hanging from a noose somewhere?

I might have been able to forgive Raslan’s crimes against me had he shown an ounce of remorse. Yet, instead, in court, I felt he gave off an air of arrogance and there was a look of disdain in his eyes. He denied that there was systematic torture in al-Khatib branch, despite overwhelming evidence to the contrary.

True justice for Syria can only be achieved when al-Assad, members of his security forces and all warlords and members of armed groups in Syria responsible for war crimes are held accountable.

When I decided to testify in this trial, I was not sure what role it would play in the quest for justice. But I know if another opportunity arose to tell a court of justice about what happened to me, I would jump at it. We can only hope that such trials will encourage further prosecutions of Syrian war criminals and bring us one step closer to a different future for Syria.

I have had the chance to see my torturer face trial – a chance that so many other Syrians have been cruelly denied. I can only hope this verdict paves the way for wider justice for all Syrians.

The views expressed in this article are the author’s own and do not necessarily reflect Al Jazeera’s editorial stance.