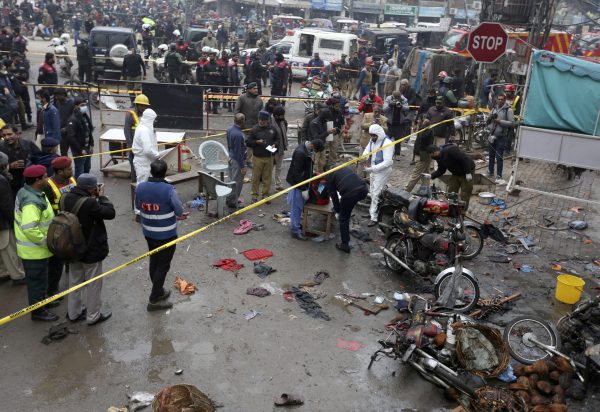 The first six months of Taliban rule show that the group has not delivered on any of Pakistan’s concerns.

A blast in a bustling market in Lahore in Pakistan’s Punjab province on January 20 killed at least three people and injured over 30 others. A little known militant group, the Baloch Nationalist Army (BNA) claimed responsibility for the attack.

Following the attack, Pakistani Interior Minister Sheikh Rashid admitted that terrorist attacks had increased about 35 to 38 percent since August 15, the day that Taliban fighters captured Kabul. Linking the rise in terror attacks in Pakistan to the “Taliban’s success” against the Indian intelligence agency, the Research and Analysis Wing (RAW), and 42 foreign forces in Afghanistan, Rashid said the attacks were the work of “smaller groups” that had recently merged together.

It is unclear whether he was referring to the merger of Baloch militant groups or of Tehrik-e-Taliban Pakistan (TTP) factions.

Stressing that the Taliban were not directly responsible for the rise of militancy in Pakistan, the interior minister clarified that the “environment in Afghanistan was not hostile to Pakistan anymore as Afghan Taliban had formed the government there.”

The minister’s statement reflects the problem of Pakistan’s counterterrorism policy domestically and regionally, which may be offering breathing space to Baloch militant groups operating across the Durand Line.

Arguably, Islamabad is happy to support the Taliban on the condition that it does not support New Delhi’s agenda against Pakistan, but will not recognize the threat that the Taliban’s emergence poses to the country’s security.

The Taliban’s victory has given confidence to several extremist groups in Pakistan, who might now expect similar treatment that the U.S. gave the Taliban.

An attack by a Baloch militant group in Punjab’s heartland shows that it is not the TTP alone that feels emboldened by Afghan Taliban’s takeover of Kabul, but Baloch militant groups too appear to be reaping benefits of the chaotic situation in Afghanistan. According to a security report by the Islamabad-based Pak Institute for Peace Studies (PIPS), Baloch militant groups carried out around 74 terrorist attacks in Pakistan in 2021. The Baluchistan Liberation Army (BLA) and Baluchistan Liberation Front (BLF) were the main drivers of violence in Pakistan in 2021, the PIPS study says.

The attack in Lahore was the BNA’s first attack in Pakistan. It took place far from Baloch militant groups’ usual stronghold of Balochistan and was perhaps meant to demonstrate the group’s improved capacity to carry out attacks on targets anywhere in Pakistan. Reportedly, BNA emerged recently due to the amalgamation of two other major militant groups – Baloch Republican Army and United Baloch Army.

A statement issued by the BNA earlier this month said that the merger of these groups was aimed at “expanding the resistance.” The announcement also said that the BNA will continue to remain a part of Baloch Raji Aajoi Sangar (BRAS), an umbrella organization of Baloch militant groups that aims to unify militancy in Pakistan.

Arguably, for Pakistan, the rising militancy and extremism is still a tolerable development when compared to the strategic gains that the Taliban’s return to power may bring Pakistan. In this regard, for Islamabad, the resurgence of Baloch and TTP militants in Afghanistan remains manageable as long as India is kept out of Afghanistan. Pakistani policymakers seem to have calculated that Taliban do not have the necessary military or administrative strength at this point to tackle the TTP and Baloch militants at. Islamabad appears to believe that threats from Baloch and TTP militants based in Afghanistan will subside once the Taliban recover financially, militarily and politically.

Unfortunately for Pakistan, its calculations are based on flawed premises. Contrary to the Pakistani interior minister’s claims, the groups merging and attacking Pakistan from Afghanistan are not small groups. These groups have threatened Pakistan’s stability and territorial integrity for years and now they feel encouraged by developments over the last few months.

It is hard to predict whether the Taliban will ever be able to stabilize Afghanistan as Pakistan hopes. The group faces many difficulties, including from within, when it comes to striking a balance between accommodating the international community’s demands and keeping its fighters and commanders happy. The Taliban movement still remains a militant outfit and it is unclear if it will ever transform into a political group that could effectively manage a modern day nation-state.

Moreover, Islamabad’s expectations that the Taliban will eventually recover from its immediate financial and military troubles to deliver on Pakistan’s concerns are also flawed.

The first six months of Taliban rule show that the group has not delivered on any of Islamabad’s expectations.

If India were to decide to develop a diplomatic relationship with the Taliban, it would find the latter more than ready to welcome New Delhi. Similarly, on the TTP, Baloch and other issues, Taliban have only dragged their feet so far.

Pakistan and India will have to find a way to accept each other in Afghanistan. The perpetual opposition is driving Islamabad into making decisions that do not appear rational when one looks at the costs it inflicts on the country’s domestic security. The last thing anyone wants to see is policy makers in Islamabad tolerating extremists in Pakistan and across the Durand Line just because they are not as big a threat for Pakistan as India may be.

The peace which Pakistan worked hard to establish in the last few years appears to be slipping away due to the country’s regional policy choices and inability to clearly define the threats that it faces.

Published in International and News