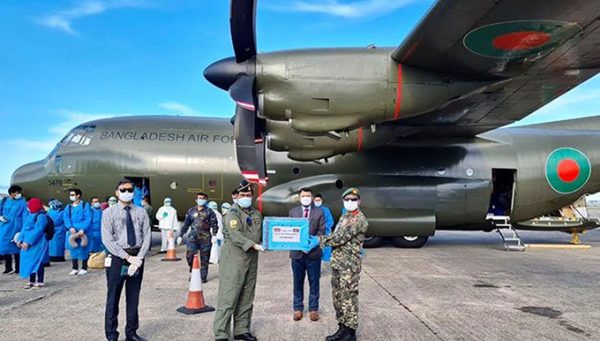 A Bangladesh Air Force plane transported several tons of humanitarian aid, a Military Medical Team and 70 Maldivian students stranded in Bangladesh due to the COVID-19 pandemic, back to Maldives, April 19, 2020.

Bangladesh Prime Minister Sheikh Hasina’s recent visit to Maldives, her first ever bilateral visit to the Indian Ocean archipelago, saw the two governments sign three memorandums of understanding relating to recruitment of health professionals from Bangladesh, cooperation in the areas of sports and youth development, and elimination of double taxation. Additionally, the two sides renewed a contract relating to healthcare and medical sciences.

Hasina’s visit came at a time when Bangladesh’s remarkable economic growth is being applauded worldwide.

In keeping with its emergence as an economic power and middle-income country, Bangladesh extended Maldives a loan of $200 million. This comes close on the heels of a currency swap agreement worth $200 million that the Bangladeshi government reached with Sri Lanka. Thanks to its economic growth, smaller countries like Maldives, Sri Lanka, and Nepal are now looking to Dhaka for economic support. This is changing Bangladesh’s image from that of a country in need of economic help to one that is able to extend such help to others in the region.

The two countries have set in motion plans to enhance people-to-people exchanges. Travel links via sea and air are poised to grow. Bangladesh will soon begin direct flights from Dhaka to Maldives. Hasina also announced visas on arrival for Maldivian nationals, provided the pandemic situation in the country improves. Bangladesh and Maldives have also agreed to extradite criminals from each other’s territory.

Bangladesh and Maldives established diplomatic relations in 1978. Bangladesh established its high commission in Maldives in 1998 and Maldives set up its mission in Dhaka in 2008. Although financial constraints forced the Maldivian government to shut down the latter in April 2014, it reviewed its decision and reopened a scaled down mission in the Bangladeshi capital a few months later.

The interruption notwithstanding, bilateral relations have grown over the years. During her visit to Maldives, Hasina drew attention to the “commonalities” between the two countries. “Bangladesh and the Maldives share religious values, cultural affinity and stand on the same plane of developmental aspiration,” she said.

The presence of a large number of Bangladeshis in Maldives provides the two countries a strong incentive for cooperation. Bangladesh is the largest source of foreign workers in Maldives with around 70,000 to 80,000 Bangladeshi nationals working in the archipelago.

There are several issues on which the two countries could cooperate to mutual benefit.

Maldives and Bangladesh are low-lying countries and said to be among the first regions in the world to bear the brunt of climate change. Rising sea levels are expected to inundate much of the Maldivian archipelago given that its highest point is just 2.4 meters above sea level. As for Bangladesh, not only are vast swathes of the country low-lying but the country is also densely populated. Climate change, climate justice, and climate refugees are among the issues that the two countries face and, as Hasina put it, they need to “work together to face the challenge of climate change.” Early last year, Maldivian President Mohamed Solih made the similar observation that as low-lying countries in the Indian Ocean, both face similar problems.

During Hasina’s visit, Bangladesh and the Maldives vowed to secure peace and stability in the Indian Ocean region by countering organized crime, piracy, and human trafficking. Both countries have also agreed to work together to combat terrorism and violent extremism.

The two countries face similar challenges from Muslim transnational militant organizations like ISIS and al Qaida. Both Maldivian and Bangladeshi nationals joined ISIS as foreign fighters. Apparently, Bangladesh has been successful in countering the threat from jihadist groups. Sharing of intelligence input and strategies with Maldives is another arena of possible cooperation.

Geopolitically, Bangladesh and Maldives have similar relations with India. While they have had a long history of interaction with India, relations with New Delhi in recent decades have waxed and waned, driven by domestic politics. Chinese investment plays an important role in the economies of Maldives and Bangladesh and this is closely watched in New Delhi. Stirring anti-India sentiment is a useful rallying point for opposition parties in both countries.

Hasina’s visit to Male was successful but the full potential of bilateral relations is yet to be tapped.

Published in Bangla and News