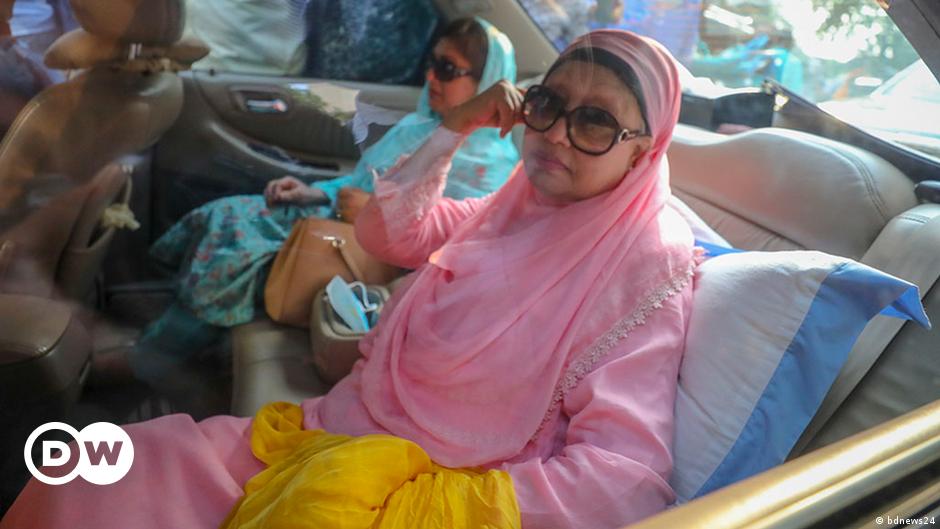 The 76-year-old former prime minister and leader of the Bangladesh Nationalist Party (BNP) has been suffering from several chronic and life-threatening diseases.

“She has chronic liver disease, among other problems that can’t be treated in Bangladesh. She urgently needs treatment in a developed country like Germany,” Zia’s personal physician AZM Zahid Hossain told DW.

However, Zia is not allowed to leave Bangladesh after having been convicted and jailed on graft charges in 2018.

At the time, her supporters said the charges were a politically motivated attempt to keep her from seeking power. In March 2020, the government allowed Zia to be released from prison as her health began to worsen.

The BNP is trying to convince Hasina’s ruling Awami League government to allow Zia to go abroad to receive treatment. However, Hasina has yet to agree. BNP supporters in Dhaka protested Zia’s travel ban this week.

The dire situation for Zia comes as her BNP’s political power continues to slip. The party has not led Bangladesh since 2006, and it lost the 2008 elections in a landslide, in which the Awami League secured an absolute majority in parliament.

The BNP and Zia were once praised as playing a crucial role in transitioning Bangladesh from military rule to democracy. However, since 2008, the BNP has been unable to regain its popularity, and the ruling Awami League has taken steps to cement its hold on power.

“We live under constant threat by the police and the administration,” she said. “We don’t know who the next victim of an abduction or extrajudicial killing will be.

Over the past decade, more than 180,000 legal cases have been filed against nearly 4 million BNP members, according to the party’s count.

The data also shows more than 600 party members have been abducted, and around 3,000 were victims of extrajudicial killings at the hands of authorities over the last 10 years.

Michael Kugelman, a South Asia expert at the Washington-based Woodrow Wilson Center for Scholars, told DW that Bangladesh’s ruling party has been carrying out a brutal crackdown on the opposition.

“The BNP’s future is grim, largely because the government has cracked down on dissent so harshly and extensively that it has little capacity to operate as a viable party,” he said.

After Awami League victories in 2014, an election that was criticized for not being free and fair, the BNP, as the largest opposition party, by 2015 had failed to succeed in getting a new election called under a caretaker government.

Deadly protests erupted, and the BNP was accused by opponents of fomenting unrest.

In the 2018 national election, Hasina secured her third consecutive term.

“Since the 2014 election, the BNP has not been able to play a consistent role as an opposition,” Ali Riaz, a political science professor at Illinois State University, told DW.

“Because, on the one hand, it has faced severe persecution, while on the other hand, its leadership has not been able to lay out a clear pathway for movement against the incumbent Awami League party,” he said. “The failed movement in 2015 has weakened it significantly.”

During the BNP’s last tenure in power between 2001 and 2006, several influential party members, including Zia, were implicated in corruption scandals. Both of Zia’s sons, Arafat Rahman and Tarique Rahman, fled the country to avoid prosecution on corruption charges.

Tarique Rahman assumed the role of party chairman from exile in London after his mother was put behind bars. Arafat Rahman died in Malaysia in 2015.

The BNP maintains that the corruption charges were all politically motivated.

Watch video 01:35 Bangladesh — ‘We do not accept the farcical election’

What is next for the BNP?

Riaz said the BNP stands at a crossroads and the future of the party’s political viability depends on several factors, including the political environment in Bangladesh, the ability of the party leadership to maintain cohesion and whether an alternative opposition party emerges.

“The third factor is not an eminent issue as the BNP’s appeal and name recognition will not go away soon,” Riaz said.

“But further erosion of democracy will continue to push the party to a slow death as it will face further persecution, and its leaders are failing to devise a strategy to address the situation,” he added.

Analyst Kugelman said the BNP is caught between a rock and a hard place, and its chances of revival are very uncertain as the Awami League has built up its control over political opposition and dissent.

“If it somehow musters the capacity to mobilize its base on the streets, it risks fresh crackdowns. But if it sits quietly, the party will simply creep more toward irrelevance,” he said.

“This means we could see parts of the party break off and form new entities. But unless any of these new factions were to take a conciliatory position toward the ruling party, it’s hard to imagine them carving out space to operate,” Kugelman said.

Published in Bangla and News